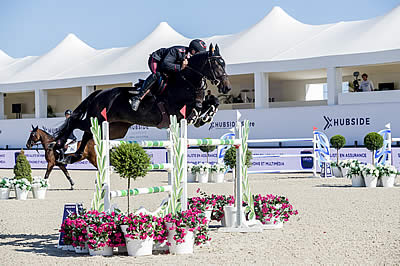 In the major event of the CSI 4 * of the HUBSIDE JUMPING in Grimaud, the Italian Emanuele Gaudiano and his “exceptional” Carlotta 232 won ahead of the Frenchman Simon Delestre on Chesall Zimequest and the Swede Henrik von Eckermann on Forever.

“Carlotta jumped really well today. She’s in great shape. She felt a little peckish in her form coming out of confinement, but after a month, it was off again. To be honest, she’s exceptional. I have known that since the first competition in which we participated together. I remember it very well: she was five years old, it was in Samorin, and we participated in the events dedicated to her age category. She won four of the six races run! Speaking of today and the race won, I have to admit it was not that easy. The course was demanding, with thirteen efforts and three combinations. In the last combination. besides, I had to add a stride. Many riders placed eight strides; I had to put nine. Carlotta will not come out until Saturday, on the 145 jump-off. Chalou will be this week in the Grand Prix, and next week it’s probably going to be an eight-year-old horse.”