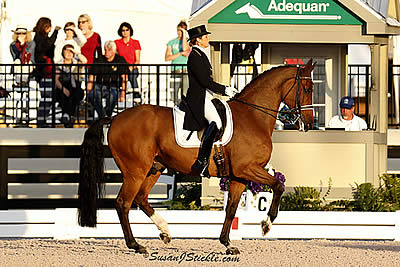 Wellington, FL – January 25, 2014 – Sweden’s Tinne Vilhelmson-Silfven finished first for the second time with Divertimento during the third week of the Adequan Global Dressage Festival (AGDF), this time winning the FEI Grand Prix Special presented by US P.R.E. Association on Saturday evening. Vilhelmson-Silfven and Divertimento, a 12-year-old Westphalian owned by Lövsta Stuteri, topped the class with a score of 74.882%.

The third week of the AGDF concludes tomorrow with the FEI Intermediaire Freestyle along with a full complement of national classes.

American riders finished second and third, with Adrienne Lyle and Wizard placing second with their score of 70.549% and Katherine Bateson Chandler earning the third place finish with Wellnetta. The pair’s final score was 69.686%.

Vilhelmson-Silfven felt Divertimento was tenser in the ring than he had been earlier in the week in the FEI Grand Prix, but was still pleased that she could keep his focus and rideability.

“Thursday he was more relaxed; I had an easier ride. He got a bit tense [tonight but] I could still ride him and he still let me ride him and he trusted me and got relaxed during the test. Educationally, I’m very happy. I think he’s getting better and better,” Vilhelmson-Silfven commented.

Vilhelmson-Silfven is focused on maintaining the frame of mind Divertimento is currently in for future competitions.

“He’s working very well, and he’s technically much easier to ride this year than last year. I’ll just keep training. He’s in a good mood and in a good feeling right now, so I’m going to try to keep him soft and happy in that way,” Vilhelmson-Silfven explained.

Lyle was also quite satisfied with Wizard’s performance in the class, chalking up any lost points to pilot error. Despite not having as clean of a test as she did Thursday, Lyle was happy to see the gelding’s piaffe-passage work improve.

“I haven’t ridden the special in a really long time, so I have to say a couple of the errors I think were a little rider error. I was quite happy with parts of it. We had some errors, but the quality I thought of the rest of [the test] was going in the right direction,” Lyle detailed.

Third place finisher and fellow American Bateson Chandler was full of praise for her mare Wellnetta, especially since the two have not been together for long.

“My horse is amazing! She has an incredible work ethic. She goes in the ring, she has her ears up on go,” Bateson Chandler grinned.

Wellnetta’s tireless attitude does occasionally result in having a bit too much ‘go’ during the test, but Bateson Chandler would much prefer that to a mount she would have to constantly push along.

“You’re going to get tension when you have that much go in a horse. She is a workhorse. She doesn’t quit the whole time. [She wants to do] more, more, more and you have to tell her ‘less, less, less,'” Bateson Chandler explained.

Second place went to Brittany Fraser of Canada and All In for their score of 71.053%. Fellow Canadian Chris Von Martels rounded out the top three with Zilverstar. The pair finished on a score of 70.868%.

The 2014 AGDF was Mason’s first, but she and Zar certainly made the most of their trip south. Her goal for the year was to qualify Zar of the Festival of Champions (Ky.), which, thanks to her multiple wins at AGDF, she has already accomplished. Mason worked with Lars Petersen while in Wellington, who she credits with putting them on the path to success.

“I’ve been working with Lars [twice a week] since I’ve been here. We’ve been working on more power and more engagement, especially in the extensions. I need to keep going like this and build the strength now. Our goal coming here was to qualify for the Festival, which now he’s pretty sure to be in [since] his average is over 70,” Mason explained.

Following the Festival of Champions, Mason’s focus with Zar will be moving him up to the grand prix level. It’s time for her “backburner horse” she’s owned since he was four months old to step into the big leagues.

“It’s been a challenge,” Mason admitted when asked about her and Zar’s journey. A habitually spooky horse that Mason describes as “an honest to goodness chicken,” Zar has certainly tested Mason’s fortitude. It all came together Saturday afternoon, although the 10-year-old KWPN gelding was briefly unnerved as the test began.

“Zar was more relaxed than yesterday, so I could go for a little bit more. We did have one major spook at A. But everything else was good. After the spook, I upped the ante a little bit more and pushed a little bit harder to make up the points,” Mason commented. “He was much more rideable, minus the spook, which actually surprised me.”

When Mason first arrived in Florida, she hadn’t had a lesson with Petersen on Zar for some time. Not wanting to push the gelding too quickly, they played it conservative during AGDF 1 before going for more week three.

“This show I definitely pushed for more. It helps to have Lars standing out there yelling at me,” she joked. “We played it low-key at the last show, but we knew we could ask for more. Yesterday, I had to be conservative again, but today, Lars was like ‘Go for it!'”

The final test for Mason and Zar at the 2014 AGDF will be the FEI Intermediaire Freestyle, which will wrap up competition for the third week of the AGDF. Mason and Zar will head back to Mason’s Flying Change Farm, based in Lebanon, NJ, at the end of the month, but the AGDF carries on with nine more weeks of world-class dressage competition through March 30.

Competition concludes with the FEI Intermediaire Freestyle on Sunday morning at 10:00 a.m. for the AGDF 3 CDI-W, presented by the US P.R.E. Association and the Chesapeake Dressage Institute. AGDF 4 Dressage National runs January 29 – February 2.