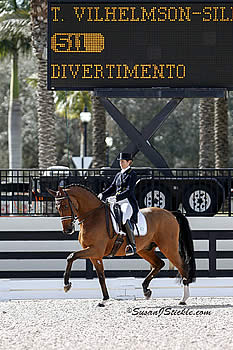 Vilhelmson-Silfven and Lövsta Stuteri’s 12-year-old Westphalian gelding topped the class with a score of 75.000%. The top three was rounded about by Danish riders Lars Petersen, who rode Mariett to second place with a 73.320%, and Mikala Munter Gundersen and My Lady, who were third with a 71.640%. Megan Lane of Canada was fourth with a score of 71.020% on Caravella. The top placing American rider was Adrienne Lyle, who finished fifth with Wizard on a score of 70.100%

The AGDF 3 Dressage CDI-W, presented by the US P.R.E. Association and Chesapeake Dressage Institute, runs January 23-26 at The Stadium at PBIEC. The feature event for the week is the FEI World Cup Qualifying Grand Prix Freestyle on Friday evening from 4 p.m.-7 p.m.

“The best feeling I had was in the canter. He relaxed a little bit more once I got going. It was a bit tense starting, but he felt better and better. I was very pleased with the canter work because that’s not always the easiest on him. I was happy with the pirouettes and the zig-zags, but overall I was happy he was so good in his mind and so relaxed,” Vilhelmson-Silfven commented.

Vilhelmson-Silfven opted out of any freestyle competitions with Divertimento to concentrate on helping the horse mature, a decision that has clearly paid off.

“He feels much more mature. I took a break from freestyles just to get him more focused and trained a bit instead. I think I felt today that it was the best thing to do to give him a little bit of a competition break and get more mature and more ready for what he should do,” Vilhelmson-Silfven remarked.

When asked if Wellington was a good luck charm for Vilhelmson-Silfven, who has had three CDI victories in her first three outings, she smiled, “It must be! It’s been a great thing for me these years, traveling here and being able to compete her in the wintertime, when everything actually stops a bit [in Europe]. It’s been good for these horses.”

Adrienne Lyle was the highest placed American rider after a fifth place finish with Peggy Thomas’ Wizard, another horse back in the show ring after some time off.

“It’s been a year since we’ve been in the ring. We did a national show in preparation for this and I thought today he felt much better, so hopefully we’re going in the right direction,” Lyle detailed.

“I worked just on my technical parts of the test today, making sure I get back in test-riding mode. Riding the corners, riding the preparations. We had a couple losses of balance coming into the piaffe, it was not so good, and then a couple little issues that I think we can get better, but really just trying to get back from training mode,” she continued.

Lyle looks forward to competing the rest of the season of AGDF to get Wizard, and herself, back in top form. With a whopping 30 entries in the FEI Grand Prix, she shouldn’t have any trouble getting the exposure she is looking for.

“It’s amazing. It’s so above and beyond any numbers of anything I’ve been in. It’s so exciting!” Lyle expressed.

Peterson, Munder Gundersen, and Vilhelmson-Silfven all agreed that a class as large as Thursday’s was quite similar to numbers seen in Europe, which provides riders with top tier competition.

“I think it’s great. This feeling that we could look a little bit in the morning and get ready and warm up. That’s kind of the way we can sometimes do it in Europe. I really liked that today, the possibility of seeing somebody else ride (in the Grand Prix class). And great rides this morning as well,” Vilhelmson-Silfven described.

“You don’t get many chances to watch Grand Prix all day, at least I don’t,” Lyle commented. “Not in Idaho!”

Vilhelmson-Silfven was also awarded with the Champion Equine Insurance Dressage Style Award for her winning ride with Divertimento. Gabriella Stumpf was awarded the Show Chic Turnout Award during the FEI Jog on Wednesday afternoon.

Competition for AGDF 3 continues Friday with the FEI Prix St. Georges presented by Chesapeake Dressage Institute starting at 11:05 a.m., followed by the featured class for the week, the FEI World Cup Qualifying Grand Prix Freestyle presented by US P.R.E. Association from 4:00 p.m. to 7:00 p.m.