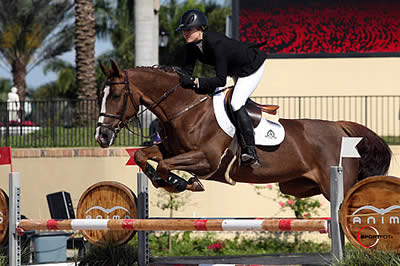 Wellington, FL – March 26, 2014 – The final week of competition at the 2014 FTI Consulting Winter Equestrian Festival (FTI WEF) kicked off on Wednesday with a dual victory for Canada’s Tiffany Foster and Germany’s Daniel Deusser in the $34,000 Spy Coast Farm 1.45m speed class. Due the large number of entries, the class was held in a ‘California Split’, and awarded two sets of placings with $34,000 for each section. Foster and Artisan Farms LLC’s Melody des Hayettes Z topped Section A and Deusser and Stephex Stables’ Domingo were the winners of Section B.

Live streaming is available for two events this week. Watch them at the following links.

Anthony D’Ambrosio (USA) is the course designer in the International Arena for week twelve. In Wednesday’s $34,000 Spy Coast Farm 1.45m, D’Ambrosio saw 97 entries over his speed track with 31 clear rounds. Tiffany Foster completed the fastest clear round in 61.01 seconds overall for the win in Section A of the class riding Melody des Hayettes Z. Daniel Deusser finished in 61.41 seconds with Domingo for the win in Section B.

With the split class, the top three finishers in Section A were Foster and Melody des Hayettes Z, followed by Reed Kessler (USA) and Kessler Show Stables’ Soraya de l’Obstination in 63.23 seconds, and Darragh Kenny (IRL) with Eva Castegren’s Alpha VDL in 63.52 seconds.

In Section B, Deusser and Domingo led the way over David Will (GER) and Eveline Kraus’s Black Jack 163 in 63.25 seconds, followed by Eiken Sato (JPN) with Stephex Stables’ Q Royal Palm Z in 63.55 seconds.

Foster has had Melody des Hayettes Z since July of last summer and explained that she has had a great partnership with the mare this winter. “She is really good, and she has been really consistent here,” Foster stated. “She has had a lot of really good placings and top three finishes, but she hasn’t won a class yet, so I was really happy that she won today because she deserves it.”

Before her round, Foster made a good plan with trainer Eric Lamaze and executed everything perfectly. “Eric gave me some really good advice before going in,” she noted. “He said that the most important thing was to go really fast from jumps one to two and to go really fast to the last fence. I kind of started on a really open stride, and I didn’t pull the whole time. Everything showed up really well, so it was really easy to go fast today. Everything showed up coming really forward, so it was fast from the beginning to the end.”

Foster plans to show Melody again in the $34,000 G&C Farm 1.45m on Thursday and then the $100,000 Suncast 1.50m Championship Jumper Classic Final. “She is really amazing,” the rider praised. “She is actually pretty straight-forward and she is a really cool horse because she is able to go in these speed classes and go full speed, and then she has been clear in every 1.50m class I have jumped her in so far this circuit. That has been after running in the 1.45m classes, so she is really versatile. She never gets hot, never gets flat, she just keeps jumping up. She is a really high quality horse, and I am very lucky to have her. I am really grateful to have Artisan Farms as owners to have such amazing horses. I have had such a fun circuit with them.”

With the win in Section B, Daniel Deusser has added to his experience in the winners’ circle with his mount, Domingo, but until Wednesday, a win had eluded that pair in Wellington.

“He has jumped now three shows here, and this is the first class that he has won here,” Deusser pointed out. “He has won a lot of classes. The 1.45m speed classes are definitely his level, but I have to say, I tried already a few times here and I was not fast enough compared to a lot of these horses and riders. There are a lot of riders here and a lot of people who tried. So far I was a little bit unlucky, but not today. He tried again, and it was just good enough.”

Where Foster explained that she got her speed from fence one to two, Deusser noted that that was probably where he lost it. “In that course, there were a lot of long ways between the jumps, so you had to count a lot from the beginning,” he explained. “I think to really be the fastest at the end, I missed it a little bit from number one to number two. I did one stride more than a few other ones that I saw. For the rest, I thought I had a pretty good round and he had the same ideas as me, so I was quite happy with my course.”

“He is a little special,” Deusser described of Domingo. “He has been going to the shows every few weeks since I have been here for two years now, and still every time he goes in the ring, he is a little bit spooky. Especially in the first few weeks here, around the fences on the wings and the flowers on the ground, he was quite spooky, but to be honest, today was the first time that he didn’t give me that impression. He really concentrated on the jumps and tried to do a good job.”

Domingo shows again in Thursday’s 1.45m and then he is done for the winter in Florida. Deusser then looks forward to Saturday night’s $500,000 FTI Consulting Finale Grand Prix CSI 5* with Cornet d’Amour, who jumped a clear warm-up round with time faults in Wednesday’s class.

“He has jumped a few big classes good already,” Deusser noted. “Three weeks ago he was second in the WEF (Challenge Cup) and fifth in the grand prix. I just rode him in the 1.45m and he gave me a good impression, so I hope we are ready for Saturday night.”

Also showing in the International Arena on Wednesday, Ben Maher (GBR) guided Amy Carr’s Charmeur to victory in the $1,500 Adequan 7-Year-Old Young Jumper speed class. Laura Chapot (USA) won the $1,500 8-Year-Old Young Jumper speed round with Out of Ireland, owned by The Edge. Chapot was also second in the 7-Year-Old class with Mary Chapot’s Cast a Dream. For full results, please visit www.showgroundslive.com.