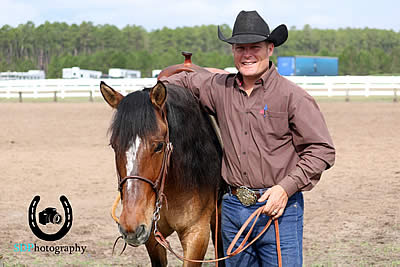 Jacksonville, FL (April 25, 2016) — With less than two weeks to go until the start of the Extreme Mustang Makeover at the Jacksonville Equestrian Center on May 6-7, Mustang trainers like Jimbo Albritton of Penney Farms, Florida are preparing for action.

The competition at the Jacksonville Equestrian Center will begin with an opportunity for spectators to meet the trainers and the horses on Friday morning, before competitors gather in the main arena for show prep. Next, each trainer and Mustang duo will compete in several classes. Friday’s classes will include Handling and Conditioning, Youth Classes, and an Adult Trail Class. On Saturday, coffee and donuts will be provided in the morning before further Mustang exhibitions and award ceremonies.

Spectators can enjoy free admittance to the event on Friday and until 4:45 pm on Saturday. After 4:45, the competition will really get serious. The top 10 Mustang and trainer pairs will be announced, and they will head into the Top 10 Freestyle Finals – where they can strut their stuff and show off what they learned in their own personal style. The Extreme Mustang Makeover Freestyle Finals are known for jaw-dropping performances; past Freestyles have featured riders standing in their saddles, roping, obstacles, and more.

As competitors work to put a few more days of training on their assigned Mustangs, participant Jimbo Albritton feels lucky that he and his Mustang mare, Penney, hit the ground running. Albritton says, “It was the luck of the draw that I was assigned Penney.” Even from the beginning, the sweet-tempered mare seemed to act more like a puppy dog than a fiery Mustang.

But despite Penney’s sweet disposition, she’s had a lot to learn these past couple of months. “Everything is going right and it’s been a dramatic change since the first day,” Albritton commented about Penney’s progress. “She’s a lot more quiet and we’re going places. Her skill level has drastically increased.”

As Albritton prepares for show time, he’s now focused on perfecting those skills. “I really want to refine a couple of things,” he said. “I want to make lead changes more solid. I’d like her to be a touch quieter and a little more solid in her overall performance.”

On the line – for Albritton and everyone competing in the Extreme Mustang Makeover challenge – is a $25,000 award and custom-made Gist belt buckle for the winner.

But even as Albritton vies for the flashy reward, he plans on keeping things simple and sticking to the basics. When asked about his plans if he qualifies for the Top 10 Freestyle Finals, he said, “My main plan is to do simple things great, instead of doing a lot of complicated things not so great. We’re going to stick to a reining pattern – some spins and stops – and see if she’ll lay down for us.”

At the end of the day, whether Penney nails her spins or her stops, Albritton is grateful for the time he’s spent with his lucky little mare and, most importantly, he hopes that his work with Penney leads to her finding her forever home, as all Mustangs will be available for adoption after the event.

To see the excitement of the event yourself or to adopt one of the competing Mustangs, head to the Jacksonville Equestrian Center for the May 6-7 events. Preliminary classes are free to watch. Tickets for the Freestyle event ($15.00) are available here.

The Jacksonville Equestrian Center is a favorite destination for equestrian and recreational events. The 80-acre facility is easily accessible from major highways in Jacksonville, Florida, and features an enormous indoor arena, outdoor arenas, and over 400 stalls. There are also miles of riding, hiking, and biking trails accessible from the Jacksonville Equestrian Center. For more information and to find out about other upcoming events, visit www.jaxequestriancenter.com or call Penny Gorton at (904) 255-4227.