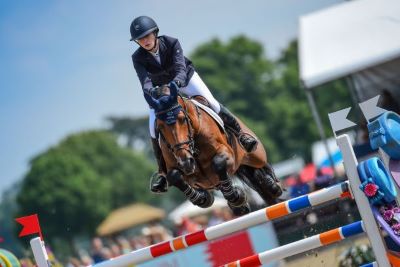 Day two of Royal Windsor Horse Show 2021 featured another typically action-packed day of top equestrian sport, with spectators treated to not one but two international classes of CSI5* Show Jumping, which featured some of the world’s best horse and rider combinations. The CAIO4* Land Rover International Grand Prix kicked off in style with a competitive Dressage phase, which saw Dutchman Ijsbrand Chardon end the day in the lead, ahead of 10-time Royal Windsor champion Boyd Exell. Away from the Showground, Royal Windsor Endurance supported by The Kingdom of Bahrain got underway in the beautiful surrounds of Windsor Great Park, while the Coaching Marathon thrilled onlookers, as competitors were judged as they elegantly navigated their way down the iconic Long Walk.

The first of two CSI5* Show Jumping classes, the Manama Speed Stakes was dominated in the early stages by Israel’s Daniel Bluman riding Gemma W. For the majority of the two phase competition, the round was proving difficult to beat. With just six combinations remaining, Britain’s Guy Williams (fresh from success in the Royal Windsor Puissance) put in an inspired performance to take the lead by 1.53 seconds. However, with just a few to go, Guy Williams was then beaten by sensational Windsor debutante, 24-year-old Lillie Keenan (USA), who took the spoils with a time of 23.73 seconds on her 10-year-old stallion Agana van het Gerendal Z, and demoted Williams to second place. Home favourite John Whitaker delighted the expectant crowd with a fantastic display of horsemanship to take third aboard Unick du Francport.

On a day that the British Olympic Show Jumping team was announced for the Tokyo Olympics, the close of the second day in the Castle Arena at the Royal Windsor Horse Show was a real showcase with all four of the confirmed squad taking part: Holly Smith, Harry Charles, Scott Brash, and Ben Maher. A total of 26 combinations took part in the 5* Pearl Speed Stakes, with 13 managing to make it into the jump-off. The jump-off course looked tight and Harry Charles went first, going clear and setting a speedy time of 36.74 seconds. He was followed by Daniel Bluman, who, whilst fast, had an unlucky four faults. Then to Holly Smith who managed to cut the tightest of corners and set a time of just 35.52 seconds, taking the lead and holding off the competition to take the honours. From there on, the next 10 combinations – which included Great Britain’s Ben Maher on his legendary gelding Explosion W – couldn’t catch Holly’s impeccable time, leaving the Brit to take the win, making it a day to remember!

“Sean,” as the horse is known at home, won here in 2018 and 2019 – the last time the Show was held – and also stood Supreme in 2018. He pinged around the Castle Arena as if on air, not only in his seven-strong weight class in the morning, but then again – somehow producing an extra gear – in the Championship showdown against the reigning Horse of the Year Show Supreme, Jayne Ross aboard the Heavyweight victor Twinshock Warrior. The approving roar of the crowd cemented the judges’ decision when he was called forward as champion.

Lincolnshire-based breeder Vanessa Compton claimed the hotly contested Horse & Hound Mountain and Moorland Supreme In Hand Championship, wowing Her Majesty The Queen – and a supportive audience – with the lovely Connemara mare Skaergaardens Delicious Love, a past Horse of the Year Show winner under saddle. She was shown by family friend Henry Hird.

The Cob section was headed by another Cheshire-based rider, Vicky Smith, who scored on her partner Alan Marnie’s super-mannerly cob, Bling Cobsby, ahead of Allister Hood’s former champion here and Horse of the Year Show and Royal International supreme, Our Cashel Blue.

Royal Windsor Endurance took place in the beautiful Windsor Great Park.  The day started with a cool misty morning when the riders in the first CEI3* 160km ever to be held at Windsor took to the course at 6.00am.  The event also hosted a CEI2* 120km, CEI1* 100km, and also for the first time a CEIYJ1* 100km.

A total of 31 competitors were entered with 12 completing.  The majority (28) were British riders but the event also welcomed riders from Australia, Italy, and The Netherlands.

John Robertson, TD, said, “In spite of the rain earlier in the week, the course rode extremely well with lovely going.  The views in this park are stunning and the variety of wildlife is exceptional.”

The winner of the CEIYJ1* 100km was 18-year-old Alicia Reeves who has been riding since she was a 2-year-old. It was her first ride of the season and her first appearance at Royal Windsor. She has been partnered with her horse, Oakley, for the past five years. Oakley was born at Bransby Rescue Centre and had to be hand reared and bottle fed. “We thought he wouldn’t make it when he was born,” said a delighted Alicia. “But he’s turned out to be a fantastic horse and we’ve had a great day today.”

Winner of the CEI1* 100km was David Yeoman with his horse, Trop Vite Azureen. “It’s been an absolutely great day and a privilege to be riding in The Queen’s Garden,” said David. “The views down the Long Walk from the Copper Horse Statue are stunning.” David has competed twice before at Windsor, coming third both times, so was delighted with his win. It was Trop Vite Azureen’s first ride in 18 months. “His fitness will have come on a lot today; he’s a fantastic horse, now 14 years old, and I’ve had him since he was a 4-year-old so I’m incredibly proud of him.”

Samantha Mowatt, winner of the CEI2* 120km aboard Lateral Thinking, said: “It’s been a challenging ride; the going was great but you had to keep aware.  When the sun came out in the afternoon, the heat was tough, but she gave me a really good ride.  She’s a home bred mare and a very willing partner.” Samantha also took time to thank the Organisers, HPower, for putting on the ride under COVID-19 conditions and to thank the Officials and Vets as well as The Kingdom of Bahrain for sponsoring.

Sadly, none of the competitors in the CEI3* 160km completed the course.  Brian Dunn, President of the Ground Jury, said: “The ride was very well organised and the ground and marking of the course were superb.  The weather was misty and cool in the morning but it became hotter in the afternoon.  Because of the pandemic, the horses have not had the chance to compete and had limited training over the last 18 months and this told on the 160km horses.  I’ve spoken to all the riders and they have all said that the going was faultless and that they were pleased to have been given the chance to participate.”