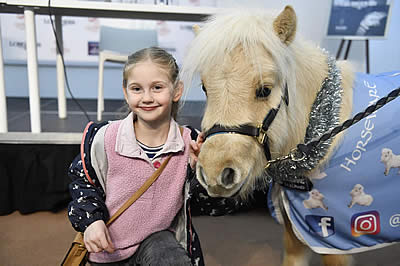 Olympia, The London International Horse Show is thrilled to announce the 2019 line-up for the hugely popular ‘Live Zone.’ Providing a unique opportunity for spectators to meet and interact with some of their favourite equestrian stars, this year’s Live Zone features online influencers as well as talks, Q&A sessions, and rider interviews.

Alongside the exclusive opportunity to meet elite equestrian athletes, the Live Zone will include guest appearances from social media sensations, including Esme Higgs, one of the world’s most popular equestrian influencers. Attending from Friday 20 to Sunday 22 December, Higgs is famous for her YouTube videos of her life with her ponies and donkeys and attracts 3.5 million viewers to her YouTube channel ‘This Esme’ each month.

Teddy the Shetland will be at Olympia on Thursday 19 December and Friday 20 December for a ‘meet and greet’ and photo opportunities. The miniature Shetland who has over 120,000 followers has become a social media superstar and has even been featured in a Dior photoshoot.

This year the Live Zone will also see appearances from young eventing rider ‘Pony Nuts,’ Vic Brant, who writes the hugely popular online blog ‘Diary of a Wimpy Eventer’ and vloggers Tina Wallace and Emily Dunstan who make videos as ‘Life on the Left Rein’ and ‘EMD Eventing’. By popular demand, pony producer Megan Elphick of Elphick Event Ponies will be making her Live Zone debut with a Q&A session, answering questions about training tactics and the best confidence-building exercises for ponies.

Olympia’s Official Charity, The Tim Stockdale Foundation, will also be supporting the Urban Equestrian Academy on the Live Zone for Part II of the Olympia Riding Academy – the initiative started earlier this year with an educational trip to the Stockdale’s yard.

The complete 2019 timetable will be announced later this month and will also include top international competitors from show jumping, dressage, and driving as well as specialist equestrian experts, and other stars of the Show.

Olympia Show Director, Simon Brooks-Ward, said: “Olympia recognises the importance of digital bloggers and YouTube stars and we want to build unforgettable experiences for both our visitors and for those people who have such an influence on the equestrian community. The Live Zone at Olympia has been an incredibly successful initiative that brings fans and riders together. This year, it returns better than ever with an extensive list of guests.”

YouTuber ‘This Esme’ is one of the world’s largest equestrian social media stars. “Olympia is definitely one of my favorite times of year. I have been every year since I was 10 years old and it wouldn’t feel like Christmas without it! This year I’m really excited to be back in the Live Zone meeting my viewers and soaking up the special Olympia atmosphere.”