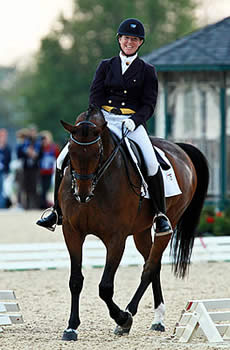 NOVEMBER 8, 2013 – For the first time in almost 30 years, national titles for adult amateur and open dressage riders from Training Level to Grand Prix were presented today at the inaugural US Dressage Finals presented by Adequan at the Kentucky Horse Park in Lexington, KY. A full day of intense competition extended into a festive evening as special celebrations were held to mark this historic event.

During the first set of awards ceremonies at midday, Emily Wagner (La Cygne, KS, qualified in Region 2) thoroughly enjoyed her victory lap around the Alltech Arena after topping 20 other competitors in the Intermediate I Open Championship. Wagner was aboard her longtime partner and U.S.‐bred American Warmblood stallion “WakeUp” (Wagnis x Maiden Montreal by Macho, bred by Beverly McLean Tetrick/Red Mare Farm) to earn a winning score of 72.412%. “It was a thrill to ride in that ring today,” Wagner said. “This venue is just amazing for this event.” Just a month ago Wagner and “WakeUp” were at the Kentucky Horse Park for the U.S. Dressage Festival of Champions presented by the Dutta Corp., where they placed third overall in the Intermediaire I division. Even as she debated making another 10‐hour trip to Lexington, Wagner knew she had to come. “I wanted to support it, and I think everyone should want to be here,” she explained. “The Regional Championships have always been our biggest event of the year, but now with the Finals I think it’s fun to be able to showcase all the hard work that everyone’s done throughout the year and then bring it together for a national event; I think that’s important for the sport.”

Perhaps no one had more success than Heather Mason on this first day of championship action at the Finals. In the morning, Mason rode her own eight‐year‐old Dutch Warmblood gelding “Zar” (Iroko x Inga by Actueel, bred in the U.S. by Carol Collyer) to the Intermediate I Open Reserve Championship with 70.219%. Under the brilliant afternoon sun in the Stonelea Arena, Mason not only topped a deep field to win the Third Level Open Championship aboard Lori Racioppo’s Hanoverian gelding “Romantico SF” (Romancero H x Wesermelodie by Wenzel I, bred in Germany) on a score of 72.821%, but also earned Reserve Championship honors in the same class by earning 70.299% with “Lincoln” (eight‐year‐old Oldenburg gelding owned by Meredith Whaley). Mason, of Tewksbury, NJ (qualified Region 8) has been looking forward to attending the Finals for a long time, and today’s wins added to her excitement. “I rode in the then‐American Horse Shows Association (AHSA) ‘national championships’ in 1984 in Kansas City and I’ve been waiting for them to come back ever since,” Mason said. “I think the organizers here have done an excellent job making this feel like a national championship ‐ it feels like a really big deal to be here. Of course I’m thrilled to win but most of all I’m just really happy with how my horses have gone today.”

Debbie Hill brought six horses to the Finals from Gurley, AL (Region 3), and her weekend got off to a winning start as she earned an impressive score of 76.339% to take the Training Level Open Championship with “Floretienne” (Oldenburg gelding, Florestan x Tamarinde by Jazz) owned by Leslie Waterman. Region 2’s Jennifer Conour of Carmel, IN rode Phoebe Crane’s Dutch Warmblood mare “Daisy Van Wittenstein P” (Johnson x Ziggy Van Wittenstein A by Florencio) to reserve honors with 74.800%. Meanwhile in the Murphy Ring, adult amateurs competed for top honors at Second Level, with Rachael Hicks of Prospect, KY (Region 2) and her own Rhinelander stallion “Don Cartier” (Don Schufro x Carmina by Cartier) receiving the unanimous win under all three judges with a score of 72.976%. Earning 67.103% for the Reserve Championship was Region 8’s Erin Laurent of Morristown, NJ riding “Whasabi” (Oldenburg, Wonderful x Glimmer by Grundstein, bred in the U.S. by Maurine Swanson).

In the afternoon, competition in the Alltech Arena was streamed live around the world via the online USEF Network, beginning with the Intermediate I Adult Amateur Championship class. Emerging victorious was Heather Mendiburu (Wantage, NJ) who returned to the saddle after six months off (due to being pregnant with her fifth child) just in time to qualify for the Finals from Region 8. Surrounded by her family, Mendiburu was thrilled with her mount “What Happen” (Hanoverian mare [Waldstar x Gina de Ro by Gloster] owned by Mendiburu and High Point Solutions) and how she earned the win with a decisive score of 69.518%. “I came to Kentucky to see the FEI World Equestrian Games in 2010, and it’s surreal to be here now showing in the same place. It’s a great honor to be here.” Sheryl Ross’s long trip home to Menlo Park, CA (Region 7) will be a happy one as she takes home the Reserve Championship on a score of 66.930% earned with her own Danish Warmblood gelding “Lancaster” (Lobster x Aleksis by Aleksander). “It’s been a long journey, literally and figuratively, to be here,” said Ross. “But it’s been a wonderful experience. I would make the trip again in a heartbeat.” Adult Amateurs also competed at Fourth Level, with less than a point separating the top two spots. Stephanie McNutt of Mechanicsville, MD (Region 1) claimed the Championship sash aboard her Oldenburg mare “Con Dia” (Contucci x Cor Dia by Cor Noir, bred in the U.S. by Hilltop Farm, Inc.) with 67.833%, while a close second (67.083%) was Patricia Fannin of Eads, TN (qualified in Region 4) with her Hanoverian partner “Roxy Royale” (Rotspon x Whisper by Werther). International rider, trainer, coach and “S” judge Kathy Connelly was the official commentator for USEF Network coverage, and she was impressed by what she saw from the Adult Amateur classes. “This is a huge accomplishment just to be here,” she noted. “We have seen some spectacular performances today, and I am very impressed with the quality of the riding.”

A huge crowd gathered at the Alltech Arena for a “Taste of the Bluegrass” dinner and evening festivities, including opening ceremonies and a special presentation by USDF President George Williams to unveil and dedicate the new Janine Westmoreland Malone Perpetual Trophy, to be presented by USDF at the US Dressage Finals for the Adult Amateur Prix St. Georges Champion. Spectators then enjoyed Grand Prix championship competition as both adult amateurs and open riders competed for the nation’s top honors in each division. Region 3 riders ruled the day in the Adult Amateur Grand Prix class as south Florida riders finished atop the leaderboard. Jennifer Huber (Wellington, FL) on her Dutch Warmblood gelding “Vito” (Jazz x Matouf by Wellington) drew first to go in the class but her score of 65.355% held up against seven other competitors, including Palm Beach’s Janne Rumbough with her gray PRE gelding “Junior” (Gaucho III x La Nina by Brioso VI) who earned 62.163% for the Reserve Championship. In the Grand Prix Open Championship, crowd favorites James Koford and “Rhett” (Dutch Warmblood gelding [R. Johnson x Madette by Hendo], owned and bred in the U.S. by Shirley McQuillan) claimed top honors with a score of 67.128%, while the Dutch Warmblood gelding “Oublette” (Amulet x Jinnardi by Expo) carried Anna Whit Watkins of Moody, TX (Region 9) to the Reserve Championship with 66.312%.

Competition resumes Saturday at 8:00am ET as ten new Finals champions will be crowned throughout the day. Follow the action through updates on the USDF Facebook page and the US Dressage Finals website, as well as watch live online streaming of Saturday evening freestyle competition on the popular USEF Network (www.usefnetwork.com). To learn more about the US Dressage Finals presented by Adequan, download competition information, review day sheets and results, and read daily news releases, visit the official event website at www.usdressagefinals.com.