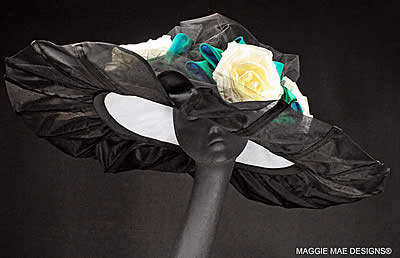 GEORGETOWN, KY – FEBRUARY 2, 2016 – Last chance! The sixth and final Derby-style hat in the online fashion auction “Hats Off to the Horses: The Road to the Derby” goes on the block April 1st.

The last hat in the six-month auction, which raises money for Old Friends, the Thoroughbred Retirement Facility in Georgetown, KY, will honor 2002 Kentucky Derby and Preakness winner War Emblem, who retired to Old Friends last September.

The beautiful chapeau is modeled by Shea Leparoux accompanied by her husband, leading jockey Julien Leparoux.

Bidding on “The War Emblem” begins at 8 pm on April 1st and will be open for 10 days only.  Interested bidders can go to the Old Friends website at www.oldfriendsequine.org and follow the link.

This is the seventh consecutive year that Old Friends has joined with acclaimed milliner Sally Faith Steinmann of the Massachusetts-based Maggie Mae Designs® to auction off six exclusive Derby-style chapeaus between November and April, each inspired by one of the non-profit organization’s 160 retired racehorses.

Following a win in the Preakness, War Emblem became a serious contender to capture history’s 12th Triple Crown, but he stumbled badly at the start of the Belmont Stakes and ended up beaten by long-shot Sarava, who, as fate would have it, is now also a retiree at Old Friends.

War Emblem went on to capture the Haskell Invitational for a third Grade 1 win that year and retired with 13 starts, 7 wins and earnings of $3,491,000.

He stood stallion duty in Japan until 2015, when he was returned to the United States to be pensioned at Old Friends.

The foundation of the “War Emblem” hat was fashioned as a wide-brim design, measuring a full 30 inches across, done in deep black silk, with a white brocade under brim that frames the wearer’s face when the hat is upturned.

The chapeau is trimmed with a unique ruffled edge that allows light to pass through the sheer fabric. Created out of black silk organza overlaid with black silk “pinstripes”, the resulting look is one of smooth elegance befitting this great Thoroughbred athlete.

Three large rose curls were placed along the crown to echo the horse’s Triple Crown campaign, with each rose beautifully framed in a medley of emerald green and bold blue leaves.

For the finishing touch, a large black pebble button adorns the back of the hat.

Maggie Mae Designs® Custom Millinery offers magnificent hats for all occasions – from glamorous racing events such as the Kentucky Derby and the Royal Ascot to stunning bridal wear and handsome cocktail fashions. Every hat is carefully handcrafted by milliner Sally Faith Steinmann from her home base in South Harwich, MA. Salons of her fashions can be seen on her website at www.maggiemaedesigns.com.

Old Friends is a 501 (c) (3) non-profit organization that cares for over 160 retired racehorses. Its Dream Chase Farm, located in Georgetown, KY, is open to tourists daily by appointment. Old Friends also has a satellite facility in Greenfield Center, New York, Old Friends at Cabin Creek: The Bobby Frankel Division, which is also open to visitors. For more information on tours or to make a donation, contact the main farm at (502) 863-1775 or see their website at www.oldfriendsequine.org.