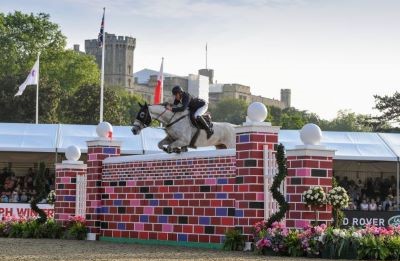 The Puissance will once again take centre stage at Royal Windsor Horse Show, which takes place from 12-15 May 2022. After a successful reintroduction last year – following a 12-year hiatus from the Show – the high jump competition proved a hit with Windsor’s crowds. Held once again against the impressive backdrop of Windsor Castle, the prestigious Puissance will be held in the Castle Arena on Thursday 12 May, the first day of the CSI5* Show.

The Puissance dates back more than one hundred years and is one of the most exhilarating competitions in the show jumping discipline. Aptly named after the French word for ‘Power,’ The Puissance is the ultimate demonstration of strength, precision, and trust between horse and rider. The current world record for the Puissance is held by Germany’s Franke Sloothaak. He cleared 2.40m at Chaudfontaine, Belgium in 1991 upon his horse Optiebeurs Golo.

The competition consists of up to five rounds, and with each round bricks are added to the wall to increase its height. Last year’s Royal Windsor Horse Show Puissance was a true spectacle, with it being jointly won by Guy Williams and Joseph Stockdale, who both cleared an impressive 2.10m. Williams rode his trusted partner Mr Blue Sky, often referred to as the most talented Puissance horse of his generation. With numerous successes at competitions such as the London International Horse Show, the duo were the clear favourites when they entered the arena. However, Stockdale, the youngest competitor in the class, pulled out a fantastic performance on Florida VDL – a horse he had never competed on before. After a tense final round, the two competitors’ magnificent performances in front of the Windsor crowd meant the 2021 top prize was split.

Show Director, Simon Brooks‐Ward, said, “We are delighted to welcome back the Puissance to Royal Windsor Horse after its success last year. The class is always such a crowd pleaser and adds so much excitement to the Show. It is always so impressive to see the bravery and skill that the horses and riders have when jumping the Puissance wall.”