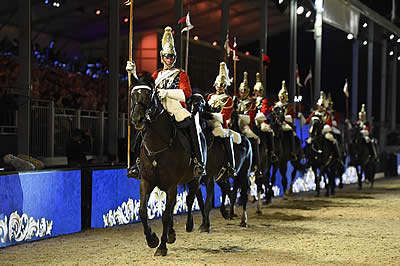 2019 celebrates the 200th Anniversary of the birth of Queen Victoria and to mark this significant occasion, the BAFTA Award winning team of the 2016 Best Live Event (The Queen’s 90th Birthday Celebrations) will stage The Pageant on the evenings of 9th, 10th and 11th May at Royal Windsor Horse Show.

Presented by Alan Titchmarsh, The Pageant Compere, the 90-minute show will bring together memorable events from the Victorian Era including Elgar, the Music Hall, Gilbert & Sullivan, Dickens, Rail Travel, and the Industrial Revolution. With only 3,500 seats for sale each night, The Pageant should prove to be the hottest ticket in town.

A cast of artists, dancers, and performers, together with 500 participants, over 400 horses, and 30 carriages, will re-create 19th Century Great Britain and the Reign of Queen Victoria in a theatrical tableau beneath the floodlit Windsor Castle.

The show will be choreographed by Dougie Squires MVO, who was responsible for the stage direction of The Queen’s 90th Birthday Celebrations.

Alongside the Household Cavalry and The King’s Troop Royal Horse Artillery will be the Czikos from Hungary, the acrobatic and daring Land of Fire Display from Azerbaijan, Pipes & Drums, Dancers from the Music Halls, performers from Gilbert & Sullivan Operas, and a Balmoral Dressage Quadrille.

This joins the Pageant Series at Royal Windsor Horse Show, which over the years has included All The Queen’s Horses (2002), Windsor Castle Royal Tattoo (2008 to 2011), The Diamond Jubilee Pageant (2012), and The Queen’s 90th Birthday Celebrations (2016).

Tickets for The Pageant go on sale next week and visitors may purchase them online at www.windsorpageant.co.uk or via the box office on 0844 581 0755.