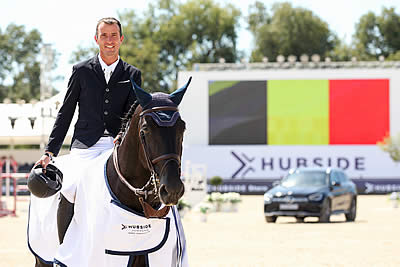 Penalized by an unfortunate point of time exceeded in the Grand Prix of the CSI 4* of the HUBSIDE JUMPING of Grimaud, the Belgian Grégory Wathelet wins in the Grand Prix of the CSI 2*, associated with Iron Man van de Panderborre. He is ahead of Scott Brash on Hello Mr President and the American Jessica Sprinsgteen on Volage du Val Henry. Best Frenchwoman, Marion Skalli, is fifth in the saddle on Rialto de Chassignol.

“To come back to yesterday’s Grand Prix, the course manager’s task was not at all easy. On paper, he had to offer a 4* course, but in fact, he had to deal with a 5* target. Already Friday evening in the big event, the first three are horses with a lot of experience, including experiences in the championship. So it is very difficult for the course manager, who despite everything did a very good job last night. Of course, the time was very short and I paid the price, but I will not give him wrong. In the end, the jump-off was of great quality, with seven clear rounds, which we riders prefer, really to a jump-off at eighteen for example. If he had set a time longer than two seconds, then there would have been fifteen additional jump-offs, which is not necessarily better. It was certainly against me yesterday, but the sport was beautiful and I was delighted with my horse.

“Today, in the 2* Grand Prix, it was different: we are not in the same range, in the same odds. But there is always this top plateau, of a much higher level than that of a traditional 2*. So again, I find the work of the course manager very good. There was no race at the jump-off, with twenty-five qualified, which would not have been very happy. I had decided to hire Iron Man van de Padenborre for his return to competition, when he is more used to CSI 5*. This Grand Prix was in a way a training. It was the first real horse show since December last year. In January he got a break, then I got a shoulder injury. We had to start over at ‘s-Hertogenbosch, but the competition was canceled at the last minute. Then we received a lot of breeding requests. So much so that we meet here for its cover. He did a little competition three weeks ago, but his real recovery was this week, in 2*. No doubt that next week, he will stay on this level to resume a few kilometers, even if he jumped well today. I do not want to go too fast; we will see week after week to get him going again: I am listening to him.”