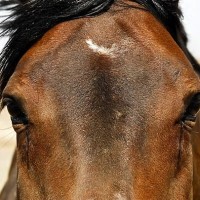 I had not been sick once in the year and a half of visiting Tom and Shorts. The coffee was always good and the corn muffins tasty along with an occasional batch of chocolate chip cookies. But this day’s call came with a sense of urgency in her voice.

“Doc, this is Shorts. Our young horse is really sick. He hasn’t eaten since last night and he’s got diarrhea.” I asked her to describe things in more detail. She replied, “It’s like water coming out of her rear end and she’s really depressed.” My concern was high as I canceled my regular calls and drove out into the desolate part of my practice area.

I parked my truck and pulled on my overboots. I had known this day would come on this farm. I had discussed the value of cleaning up things but most importantly, I had described the dangers of a filthy environment and mixing of different animals in limited confines.

The horses were in small pens rarely cleaned. Like many people in the area, their belief was that a layer of manure provided warmth as it fermented. I would explain that yes, the breakdown of manure does create heat if in a confined area but not when it is exposed to the open air in winter. Then I would tell them my “pot holder” story.

A pot holder protects our hands from a hot pot using air as an insulator. However, when the pot holder is wet, the insulation is gone and your hand will instantly burn. Manure is composed of mostly water and therefore offers itself as a conductor of heat FROM the horse into the ground. A horse stabled on its manure is a cold horse.

Tom and Shorts’ horses lay on wet manure in pens with poor protection from the cold winds. Chickens and goats freely roamed between the pens adding their waste everywhere, especially on the horses’ feeding areas. The filth and the cold added stress to the horses and it was a recipe for the disaster facing me today.

I performed my exam on the thin young colt and diagnosed him with inflammation of the digestive track caused by stress and a bacterium. They asked me about treatment options. Over the years I had learned that the secret to a successful treatment was not just the right medicine, but the right environment to heal. This horse needed a warm environment and around-the-clock care. I recommended they transport the horse to Cornell University’s veterinary school but was afraid they couldn’t afford it. To my surprise, they said yes. Tom was now driving a semi truck for a living and his income had risen. We loaded the colt into his trailer and away they drove.

This colt was diagnosed with Salmonella, a bacterial infection common with stressed animals living with ruminants and birds. He made a full recovery and about a month after his ordeal I was asked to come out to do Coggins tests on all the horses. They were moving to New Mexico after Tom realized his small New York farm had almost killed his horse. One day on a route through the southwestern state he came across the solution. I never knew that bill collecting and truck driving could be so lucrative.

Tom was on the road driving but Shorts was ready for me on this warm and sunny late spring day. The horses had been corralled into a large holding area and hay was in small piles scattered throughout. The horses lazily munched away as I suddenly realized the amount of work that lay before me. The dozen horses were all Leopard Apps representing hundreds of spots to hand draw on the official government forms. “This is going to take me hours,” I said to Shorts. “That’s OK Doc. I’ve got the time and I’ve got some fresh made corn muffins and coffee for ya.” It was the last day I ever visited the farm.