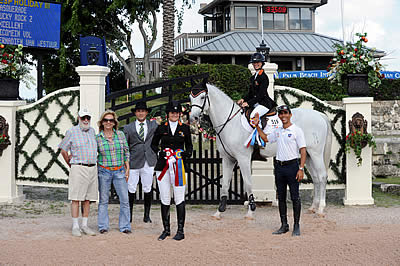 A group of stellar young Step by Step show jumping supporters was winning up a storm during the 2014 ESP Holiday Festival III horse show.  Heather Hooker put things into high gear and rode Perle to the Low Junior/Amateur Owner Championship with Daniela Stransky taking the Reserve Championship aboard her gray gelding Liverpool in addition in addition to a blue winning effort aboard her new mare Winnie.  In another ring at PBIEC, fellow Step by Step teen Emanuel Andrade put in fast and clear rounds with his mount Luky des Rocquelines to tie for Reserve Champion in the High Junior/Amateur Owner division.   These talented teens are among a slew of riders of all ages, levels and nationalities, who will be riding to raise awareness and funds for the Step by Step Foundation in 2014 both here and internationally.

For further information or to become a member of “Team Step by Step”, go to www.stepbystepfoundation.com.