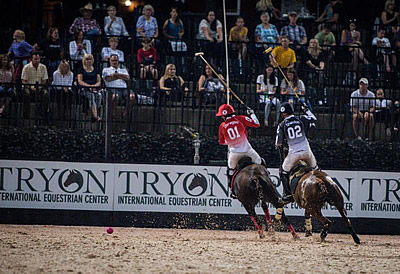 Mill Spring, NC – June 8, 2018 – Gladiator Polo™ presented by Coca-Cola® returned to Tryon International Equestrian Center (TIEC) to kick off the “Battle for the Carolinas” Series presented by Coca-Cola® with the “Battle for South Carolina”. Team Greenville emerged victorious at the close of six chukkers, with a final score of 11-7. Both were sponsored by Greenville-Spartanburg International Airport (GSP).

Team Greenville, comprised of Jared “The Fuego from San Diego” Sheldon, Pelon “Bam Bam” Escapite, and Jared “Soco” Zenni, held the lead throughout the entire match and surged ahead in the second half to lead by five. Team Spartanburg, comprised of Obregon brothers Juan Martin “The Stitcher”, Facundo “Chachi”, and Geronimo “Chori”, put up a fierce fight in the last chukker, but were unable to close the gap and avenge last season’s defeat. Team Greenville is chasing their own revenge: in last year’s $50,000 “Battle for the Carolinas” Final presented by Coca-Cola®, Team Asheville prevailed 14-10.

Escapite complimented his two new teammates and emphasized how important crowd energy was to their performance. “This year is a different crew. I played against Jared Zenni last year in Gladiator Polo™, and I have played outdoor with Jared Sheldon this past year. To get in here and come out with this win is very important,” he continued. “We needed a little bit of time to figure each other out, but after the third chukker we really worked well together. [Both Sheldon and I] are aggressive players, and it took us until the fifth chukker to click. Having Jared Zenni on the team, he brought a lot of energy and he played very consistent throughout the whole game and I think that kept us very honest,” he added.

Newcomer to Gladiator Polo™ and to Team Greenville, Jared Sheldon, noted that the innovative sport took a little bit of adjustment: “This arena definitely took me three chukkers to figure out, especially the angles on the goals,” he admitted. “The game was fun, fast, open, and there were not too many penalties. It was so much fun overall and I’m looking forward to coming back for the finals on June 23rd! We want the crowd to get as rowdy as possible and we want everyone to come on out,” he emphasized.

Jared Zenni has now participated in a three Gladiator Polo™ matches at TIEC, and notched his first win with Team Greenville. “It feels great to finally win,” he recounted. “I had never played arena polo before Gladiator Polo™, so it has taken me a little while to figure it out and adapt to it. It is a totally different game, but every time I play I am able figure it out and read my teammates better, and tonight they played amazing.”

Zenni echoed Escapite’s emphasis on the importance of a great crowd on Saturday, June 23. “I’m really excited for the Final,” said Zenni. “I think the crowd is going to be amazing and a lot of fun. I love when the crowd gets into it and they start yelling and cheering for Team Greenville and South Carolina. When you are a player, we get pretty tired, you wouldn’t think we get pretty tired, but we do, so the having the fans behind us really makes a difference in that last half.”