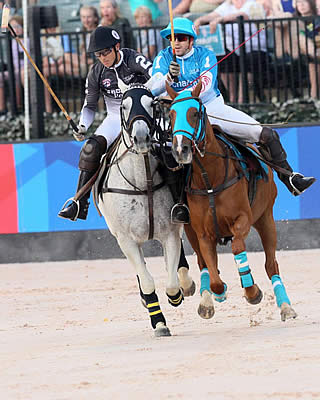 Mill Spring, NC – June 23, 2018 – The Gladiator Polo™ presented by Coca-Cola® $50,000 “Battle for the Carolinas” Series concluded on Saturday night at Tryon International Equestrian Center (TIEC), as Team Greenville presented by Greenville-Spartanburg International Airport (GSP) conquered the arena and rode away with the ultimate win at the end of a hard-fought battle versus Team Charlotte presented by North Carolina Education Lottery (NCEL), topping the evening with a score of 13-11.

The match started out fast as both teams punched multiple scores in the first chukker, immediately setting the tone of the match. The play was aggressive and strong as both teams settled into the game, resulting in one of the best head-to-head games the league has seen.

In only his second ever Gladiator Polo™ match, Jared Sheldon played a pronounced role in his team’s win, scoring a total of three goals throughout the evening. The newcomer to the league noted, “Our team worked really well together today. When one person went down, someone else picked it up and it was a really good group. The crowd was amazing! It was so fun to feed off of them and everyone was loud which makes it so much more fun for us.”

After taking some time to adjust to the intense arena setup during the “Battle for South Carolina” hosted two weeks ago, Sheldon admitted that he felt more confident his second time around. “It felt so good to win tonight. I was definitely more comfortable in there than a few weeks ago. It’s a different arena and different rules, and it all clicked today.”

The California based player concluded, “The venue, the people, everything: all of it is my favorite and it’s a blast. I hope to be back when they do this again.”

The MVP of the game was awarded to Pelon Escapite, a veteran of the Gladiator Polo™ sport, and the only member of Team Greenville to play in not one, but two, Gladiator Polo™ Final matches. Last year, the competitor rode against Team Asheville presented by Ingles in a duel that ended in loss for the South Carolina team. Returning to take his revenge and stake his claim on top honors in the title match, Escapite assured a fast and furious fight down to the very last chukker.

“It feels great to win,” noted Escapite, who scored a total of four goals for his team. “Today was a great turnout with a lot of people and an even better atmosphere. Every chukker we went out there and people were cheering for us, against us, I mean it was a special atmosphere today.”

He continued, “My teammates work so hard. Like I have said before, I get a lot of the credit, but they are working so hard for me and it is all due to them. Winning is my favorite part about tonight. We played a great team. I mean those guys are hard to beat, but we pulled it off tonight.”

Jared “Soco” Zenni admitted his team lacked momentum two weeks ago, but regained their chemistry and ultimately resulted in victory. “It feels great to win. It always feels good to win. Two weeks ago we started out a little slower, but tonight we all knew each other; we knew each other’s strengths and the game started fast.”

Zenni scored a total of four goals for Team Greenville presented by GSP fueled by the enthusiasm of the crowd. He commented, “I love the crowd. I love the intensity: them yelling at us, booing at us – they’re so into it. I love it all, but winning is my favorite. I love winning.”

Gladiator Polo™ was inspired by Mark Bellissimo, CEO of International Equestrian Group (IEG) and Managing Partner of Tryon Equestrian Partners (TEP) and Wellington Equestrian Partners (WEP), who understood that the sport of polo was in desperate need of revitalization in order to attract and broaden its traditional audience base. Combining elements of both Field Polo and Arena Polo, the concept of Gladiator Polo™ took form in Wellington, FL during the annual high goal season in South Florida and from there, the game expanded and has garnered both a national and international following. This is the second season that Gladiator Polo™ has been played at TIEC.