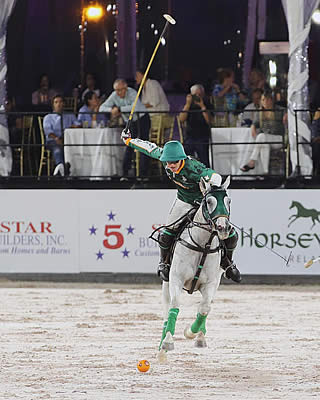 Wellington, FL – April 8, 2019 – Team Dublin sponsored by Horseware Ireland edged Team New York sponsored by Spy Coast Farm for the win in the third Gladiator Polo™ match of the season on Saturday, April 6, pushing them into the season finale to be hosted this Saturday against Team Palm Beach sponsored by Five Star Builders in U.S. Polo Assn. Coliseum at the International Polo Club Palm Beach (IPC). Team Dublin outpaced Team New York to finish the game on a final score of 20-18.

The Gladiator Polo™ Championship Final will be hosted on Saturday, April 13 at 8:00 p.m.

A children’s Ninja Polo™ match featuring Team Miami vs. Team Buenos Aires will be hosted before the start of the final game. General admission and parking are free.

Team Dublin, who was victorious in their first game over Team Los Angeles sponsored by Alugha, headed into this weekend’s match requiring an all-out effort from their talented team roster of Juan Martin Obregon, Tito Ruiz, and Mariano Obregon in order to move forward to the final game of the season. The trio came from behind in the first chukker and maintained their pace of play throughout the six chukker match. New York’s Pelon Escapite registered the first tally of the game before Juan Martin Obregon put Dublin on the board.

Holding Team New York scoreless in the second chukker, Team Dublin went on an eight-point streak to lead 12-6 heading into the third chukker. The match evened out in the fifth chukker with Team Dublin only holding a two-goal lead heading into the last minutes of play, but rallied to add three scores pulling them within reach of the win. Mariano Obregon was awarded with MVP honors presented by Palm Beach Equine Clinic.

The Gladiator Polo™ Championship Final is expected to be a fast-paced and intense match-up between this year’s two best teams. Team Palm Beach has notched wins in two stellar performances this season and Team Dublin hit their stride as a team following their well-played match against Team New York, dethroning the early season favorite.

Team Palm Beach boasts a strong roster featuring arena veteran and inaugural first pick of the 2019 team draft, Tommy Biddle, who plays alongside talents Toro Ruiz and Geronimo Obregon. Team Dublin has shown their team grit in their first two matches and will need to bring their best game to the arena for Saturday’s showdown.

The Ninja Polo™ match featuring Team Miami vs. Team Buenos Aires will be hosted before the start of the Gladiator Polo™ Championship Final set for this Saturday, April 13 at 8:00 p.m. with gates opening at 6:00 p.m. General admission and parking are FREE.