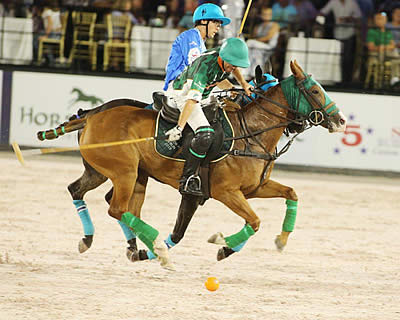 Wellington, FL – April 15, 2019 – Team Dublin sponsored by Horseware Ireland rallied from a loss at the beginning of the season to reign supreme atop the Gladiator Polo™ standings after besting Team Palm Beach sponsored by Five Star Builders in the Gladiator Polo™ Championship Final with a final score of 17-14. Team Dublin surged back from an early deficit in the first few chukkers of the match to overtake the lead in the fifth chukker to ultimately secure their win.

Team Dublin’s three players shined as Mariano Obregon, Juan Martin Obregon, and Tito Ruiz worked efficiently and effectively to help bring their team back into the match after halftime. The trio cut the score to one in the fourth chukker after keeping Team Palm Beach scoreless. Team Palm Beach, which saw fantastic play from Geronimo Obregon, Toro Ruiz, and Tommy Biddle, almost sent the match into overtime after nearly tying the game in the sixth chukker with Obregon and Ruiz tallying a combined three points for Team Palm Beach.

Team Palm Beach’s Toro Ruiz played a masterful game, tallying points in each chukker except the fourth to help keep Team Palm Beach in the hunt for the 2019 title. Geronimo Obregon supported the effort with five points, while the team’s anchor in Tommy Biddle played a more defensive role in the match.

Mariano Obregon, who has played strongly throughout the 2019 season, earned his second Most Valuable Player Award presented by Palm Beach Equine Clinic of the season, this time honoring his performance in the final match, which saw him total five points in the match and help lift Team Dublin to victory. Obregon, who has been an integral player in the Gladiator Polo™ league since its inception in 2017, commented on the season and his team’s performance in the final match.

“We started shooting on goal early, but didn’t make that many and then in the second half they started to go in. We just kept shooting and even when we were down by three or four, we kept our cool and kept going through the game and it eventually paid off,” he said. “We had a team change early in the season since one of our players was injured. Juan Martin jumped in and I’ve played with him a lot. He’s my brother, so it worked out really well.”

As for the future of Gladiator Polo™, Obregon is excited to explore the potential opportunities that will come from this new derivative of polo, which he believes will help expand and grow the sport. “It’s amazing. I really hope that we can get it going and get it on television, but it’s a lot of fun to play for sure and I think the spectators really enjoy it. There’s a lot of contact and back and forth. We try to make it quick and make it fun for everyone,” he explained.