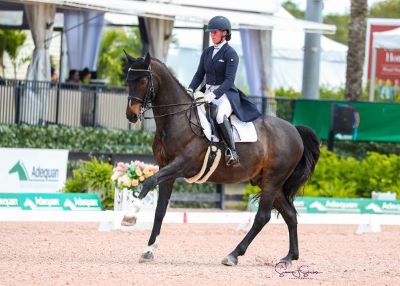 Wellington, FL – March 17, 2021 – The 10th week of the 2021 Adequan® Global Dressage Festival (AGDF) commenced on Wednesday, March 17, featuring the Nations Cup CDIO-U25 presented by Diamante Farms, and welcoming the first win for a Canadian U25 Team in five years of the Under 25 Nations Cup at AGDF.

First in the ring for Team Canada was Beatrice Boucher, who rode Camille and Gilles Bergeron’s 2006 KWPN gelding by Havidoff, Baldacci, to a score of 65.323%.

She began, “I just went in and tried my best to get through the test. It’s the first CDI that I’ve done with this horse, and I’ve only ridden him in two shows to qualify for this show, so I don’t know him very well in the show ring.”

It is the 23-year-old’s first season competing in the U25 division, and she noted that she wants to spend a bit more time perfecting her performance before heading the Grand Prix in a year or two. Of her first Nations Cup experience, Boucher said, “It’s really special to be on a team with these two riders, so it feels very exciting. They’re great teammates, and the whole experience has been fun.”

The senior team CDIO contest is at the half-way mark, with four teams — the USA, Canada, Germany, and Australia — fighting for the spot atop the podium. Team Germany, consisting of Michael Klimke, Kevin Kohmann, Christoph Koschel, and Frederic Wandres, is in the lead with a score of 223.333.