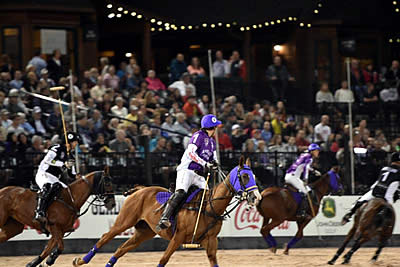 The Gladiator Polo™ “Battle for the Carolinas” Series began in late June and revved back up at Tryon International Equestrian Center (TIEC) in early September, featuring four competitive matches between a set of teams from North Carolina and another from South Carolina: Team Greenville, Team Spartanburg, Team Asheville, and Team Charlotte.

“The night was great. The crowd was even better than the last one. We threw out some crucial two pointers in the second chukker that really stepped up our game and gave us a heavy lead,” said Patrick Uretz, who was voted the Most Valuable Player of the match. “From then on we just kept the momentum going. Costi was so fast up front that it makes my job in the back really easy. That was the key to success today, my team’s quickness.”

Urtez has been the quiet yet consistent force for Team Asheville, playing a stellar game only a few weeks ago against Team Charlotte to push his team through to the final match. The more defensive-minded Uretz helped regulate the play of Team Asheville and has become a standout player in Gladiator Polo™ play.

“This is so cool to be able to come here and have people screaming my name,” smiled Uretz. “They know us and we get to represent a great city like Asheville. They gave us a lot of support, so it’s great to have them around and cheering, like when you score a free throw in the NBA – totally amazing. The future of Gladiator Polo™ looks bright and I hope to be a part of it.”

Urtez played alongside teammates Costi Caset and Geronimo Obregon, who meshed well as a team in their two matches together and each display different strengths and talents on and off the ball in play.

“I think the team played really well. I think our strength was always having a man in the back and pushing forward,” commented Obregon. “They never caught us flat-footed and they never really scored a goal in the breakaway. We played a lot better with that than last time, and we shot a lot better from outside the two point and that just changed the whole game.”

Caset accounted for many of the goals Team Asheville was able to safely put away. His speed combined with his tricky mallet and ball work pose a major threat upfront in offensive play. A perfect complement to his defensive teammate Uretz, Caset elaborated on the importance of Team Asheville’s two point plays, helping to further separate the score. He said, “It was a really close game on a tight playing field. I think we made the difference with making the two pointers, and before the game we made a plan to go for clean shots and when we could we went for those shots, and luckily they went in.”

In only his second appearance in the Gladiator Polo™ Fall Series at TIEC, Caset commented on the improvement Team Asheville experienced from their first appearance to their play tonight in the series final and how the energy of the crowd helped to change the momentum of the game.

“The night was amazing, even better than I could’ve imagined. I think we played against a great team, but we knew we had the chance to win if we played well, so this was amazing,” he added. “The arena is unbelievable. The footing, the size of the arena, around so many people, everything is perfect. I see a lot of potential in Gladiator Polo™. It’s growing really quickly, as it only started at the beginning of the year and it’ll only get bigger.”

Gladiator Polo™ was inspired by an ideology of Mark Bellissimo, CEO of International Equestrian Group (IEG) and managing partner of Tryon Equestrian Partners (TEP) and Wellington Equestrian Partners (WEP), that the sport of polo was in desperate need of a revitalization in order to attract and broaden its traditional audience base. Combining elements of both Field Polo and Arena Polo, the concept of Gladiator Polo™ took form in Wellington, FL during the annual High Goal season in South Florida and from there the game expanded and has garnered both a national and international following.

“We have been thrilled with the support and engagement of the fans and spectators surrounding Gladiator Polo™ this year at TIEC and have been thoroughly impressed with the level of play we’ve seen across the board from each of the participating players,” said Mark Bellissimo, managing partner of Tryon International Equestrian Center. “Our goal is to expand this game on both a national and international level and feel that these players and this atmosphere translates well anywhere in the world. We’re looking forward to the future of this game and are already planning the return of the series to this venue in 2018.”