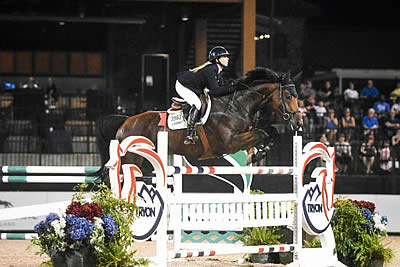 “It’s crazy! I never thought that was going to happen, but it’s amazing,” Land confided of her iconic win. “I’m so glad he [Get Go] won it; he’s my baby.”

The course, designed by J. P. Godard (Aiken, SC), tested 15 horse-and-rider combinations with nine pairs returning for the jump-off. Land shared that having more than one horse proved to be an advantage: “The last line in the jump-off, I expected to be able to get seven strides done on all of mine, [since] they’re all big-strided. With the first two, I decided to do the inside turn, and it just slowed me down and set me off to the right so much that I didn’t get the seven on either horse. With Grumbles [Get Go], I decided to go around and I lined it up in seven and it actually ended up being faster. [Having more than one horse] was a huge advantage.

“He’s amazing; he’s so special,” Land shared of Get Go, a Hanoverian, who she has owned for two years now. “We did the six-year-olds last year and we’ve been doing the seven-year-olds this year. He stepped up to do a few 1.40m classes in the spring, because we were preparing to do the seven-year-olds at Spruce [Meadows] where they were 1.40m. He was great there, so after that I felt like he was ready for the next step.” Land continued, “He was really good in the $5,000 Horseware Ireland Welcome Stake [Thursday], so afterwards, my dad and I were talking and thought that maybe we should just enter him and walk it and see. It was a great track, and he just really stepped up to the plate.”