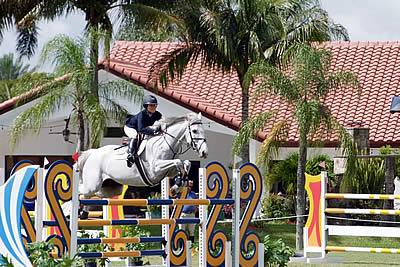 West Palm Beach, FL (March 3, 2017) – During the final week of February spring and sport were in the air at The Ridge, where the eighth consecutive week of the 2017 Palm Beach Series showcased a bustling 1.40m Turf Tour Grand Prix, challenging 1.30m Open Stake, and full jumper divisions at Polo West and Jim Brandon Equestrian Center. Luring a diverse spectrum of riders from leadline to Laura Kraut, Nona Garson and George D’Ambrosio’s vision of a laid-back, utopian show atmosphere was highlighted by the Polo West Turf Tour, which featured two rings of show jumping on the spectacular green fields lined by palms, ponds, and tropical Florida estates. With the goal of acting as a catalyst for developing young horses and advancing riders, The Ridge Palm Beach Series offers a unique atmosphere and world-class competition at welcoming and beautiful venues around Wellington.

With nearly 60 entries in the Prix, which began around noon, it was a constant stream of horses and riders as the sun sank behind the Polo West Club House. Designed by Chris Jones, the Grand Prix and 1.30m courses allowed riders the option of challenging their horses or riding a clean and straightforward course to build stamina, confidence, and scope. In the end, a very ambitious ride and jump-off for Taylor Land of Atlanta, Georgia and Nepal, a 2002 Argentine gelding by G.S. Raimundo, secured them the top spot with a jump-off time of 42.195 seconds. Land, who is the daughter of US Grand Prix rider Jay Land and has referred to Nepal as a ‘family heirloom,’ proved the gelding’s clout in the Grand Prix ring against a field of successful U25, international Grand Prix Riders, and Olympians. The UK’s Amanda Derbyshire and Cornwall BH put in an tactical round and jump-off to slide into second with 42.473, with US Olympian Laura Kraut and Deanuville less than a second behind her in third on 42.974.

Earlier in the morning, Peter Jordan with Eurhythmic and Erynn Ballard with Extra B put in winning rounds in the 1.25m-1.30m divisions over a scaled down version of the Grand Prix course. In the adjacent field, the Lows, Mediums, and Highs saw Emma Pell and her mounts Ari 55 and Amelie victorious in the 1.00m Jumpers, while the 1.10m’s were topped by Diana Walters with The Hustler and Kevin Apicella and Darius. Rounding out Ring 2, Samantha Johnson and Gallant swept both classes in the 1.20m Jumper division.

In a late in the day effort against a number of eager competitors, Colombian native German Camargo and Centurio jumped to victory in the Palm Beach Series’ $5,000 1.30m Open Stake, a newly implemented addition to The Ridge’s offerings. Presented in the all-weather sand arenas at Jim Brandon Equestrian Center, the Open Stake and majority of the Palm Beach Series classes take place at this spacious, equine friendly show grounds just ten minutes from Wellington’s equestrian mecca.

Camargo was experimenting with new bits for Centurio, which prompted him to choose a few smaller classes in a more relaxed atmosphere. “I purchased Centurio when he was 5, and he is a very talented horse with a lot of scope,” said Camargo of the 12-year-old Oldenburg. “We have won a lot together and showed in a number of Grand Prix classes. Over the years I’ve discovered he can become slightly strong in the ring, and I wanted to try him in a few different bits. This was a great venue to test out our new equipment.”

The new bit seems to be to Centurio’s liking, as the pair jumped double clear and in a final jump-off time of 44.605 to win the class. With regard to the course, series, and his horse’s performance, Camargo commented, “It was a technical course, but I was able to have a smooth round. Even though the jumps were not that big the track was challenging. The jump-off had a few interesting options to go faster. Centurio jumped very well, and seemed to be happy in the new bit. I am happy with the way he performed. I think the Palm Beach Series is a great option, with a much more relaxed atmosphere where you can focus on the horses.” Tim Hooker and Cassini’s Valentine finished second in the Stake on 47.400 seconds and Adrienne Sternlicht with Oreade Des Dames rounded out the top three with a four faults in the jump-off and a time of 36.134.

Speaking to the vision behind the inception of the Palm Beach Series, George D’Ambrosio, who founded and co-operates The Ridge with US Olympian Nona Garson, stated, “Our goal was to offer riders opportunities to develop their horses further in the competitive arena, and particularly our $5,000 1.30m Open Stake gives the option of stepping up or changing a strategy without the stress of a higher class and the chance to win great prize money at lower heights. The Turf Tour runs in the same vein, giving horses and riders a break from the mental and physical rigors of the standard horse show and providing a beautiful venue with all natural footing and a relaxed atmosphere. It’s also a great chance to for riders to prepare for the upcoming grass season in the summer and early fall.”