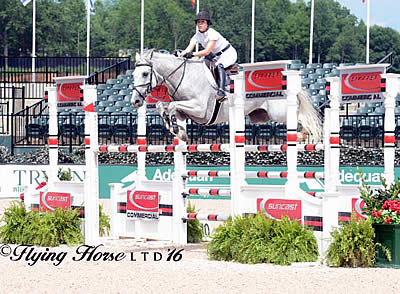 Mill Spring, NC – June 3, 2016 – Taylor Land of Atlanta, GA and Nepal collected a first place finish in the $25,000 Under 25 Grand Prix at Tryon International Equestrian Center (TIEC), completing the jump-off in 40.795 seconds for the win. Luis Larrazabal of Wellington, FL finished in second place aboard Quintus Fabius, crossing through the timers in 41.623 seconds, while Bryn Sadler of Santa Fe, NM and Cezarro earned third with a time of 42.012 seconds. Competition at Tryon Spring 7 continues Saturday with the $130,000 Ariat® Grand Prix CSI 3*. Gates open at 6:00 p.m. and the class is set to start at 8:00 p.m.

Land and Nepal, a 2002 Argentine gelding (G.S. Raimundo x Rye Grass Finest RP H-31) owned by Jay Land, went early in the order, entering the ring as the third pair to test the track set by Michel Vaillancourt (CAN). Land and Nepal led with a clean effort on the first round track, moving them forward to the jump-off round. Brittni Raflowitz, of Palm City, FL and Baloumina Du Ry, followed after Land, also securing a place in the jump-off and ultimately finishing in fourth.

“He’s fourteen and we’ve had him for nine years now. He’s like a family heirloom,” laughed Land. “He’s been passed around between me, my sister, and my dad, and he’s just been a great horse for us all around.”

The duo rode a crisp first round, which demanded technical attention and skill, as it included several tight turns and two forward combinations. According to Land, Nepal has made great strides since her family bought him as a young horse, and he has steadily made his way through the ranks with several members of the Land family.

“We started him when he was five and he hadn’t jumped any bigger than 1.20m at the time. I’ve done so much with him and he’s been such a great horse for me,” explained Land. “We’ve done NAJYRC and Spruce Meadows together and really anything we ask of him he’ll always do.”

This is the duo’s top finish to date at TIEC this season and Land was pleased with their rides in both rounds, noting that the gelding felt fresh and mentally prepared for the class even before they entered the ring.

“This is our first class this week, but we’ve been here for three weeks so he felt like he was ready to go,” she noted. “My plan was to try and be smooth and clear in the first round and I think we accomplished that.”

Land went first in the jump-off round and attacked the course with a forward and bold round in an effort to seal the win, knowing that only three riders followed her in the order. She explained, “Since I had to go first in the jump-off I knew there weren’t so many people behind me and I decided to go fast and really go for it. It was either going to be first or fourth for us, but it worked in our favor today.”

The duo will stay and compete next week at TIEC, before taking a small break ahead of the summer season. Land explained, “We’ll be here next week for the CSI 5* and then I think head home for a bit of a rest. I love showing here though because the atmosphere is just incredible. The bigger classes on Saturday always have a great crowd and I love the feel of the ring. It just feels really intense all of the time.”

Hunter Holloway of Topeka, KS continued her momentum from Tryon Spring 6 into this week’s competition, capturing top honors in the $10,000 USHJA National Hunter Derby hosted at TIEC aboard Entourage, owned by Hays Investment Corp., with a total score of 173. Blythe Marano of Franklin, TN and Fondant, owned by Virginia Ingram, finished in second with a total score of 172.5, while Daniel Bedoya of Magnolia, TX and Playbook, owned by Monica Hanks, collected third place, receiving a 170.5.

“He’s seven and we got him a year ago. He moved up to the Junior Hunters towards the end of the season in Ocala and has been really awesome ever since. He just keeps stepping up,” commented Holloway. “He scored a 90 last week and a 91 today so I’m feeling pretty good about how he’s going right now.”

Holloway rode the handy round beautifully, piloting Entourage to a smooth and accurate round, showcasing his athleticism and attentiveness. She entered the round with a plan to take advantage of the numerous inside turns on course, which helped her to secure the win.

“There were a lot of inside turns that were options and I felt like I had ground to make up from the first round so I decided to go for them,” she said. “I wanted to take the chance and really go for it. He handled it very well. He was up for the task all the way around and I was really impressed.”

Entourage began his derby career this past spring with Holloway guiding from the irons and he’s displayed a sense of consistency and bravery that has impressed everyone at Equi-Venture Farm.

“He’s very easy and is a really straight forward horse. We’re hoping for a good summer season and success at indoors in the fall,” she smiled.

Competition at TIEC continues Saturday with the $130,000 Ariat® Grand Prix CSI 3*. Gates open to the public at 6:00 p.m. and competition begins at 8:00 p.m. Parking and general admission are free! For more information on TIEC and to see a full list of weekly results, please visit www.tryon.com.