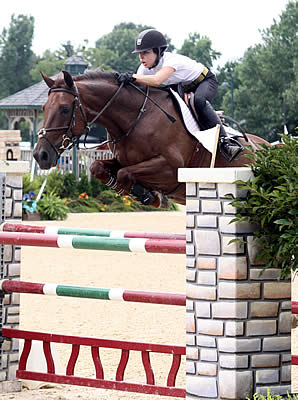 Lexington, KY – August 2, 2013 – Taylor Land is only in Kentucky for a few short days, but while here, she is enjoying the beautiful weather and making magic aboard Merlin. Land and Merlin were one of only two duos to go double clear in the Junior/Amateur-Owner High Jumpers before they earned the win today at the Kentucky Summer Classic. In the Junior/Amateur-Owner Medium Jumpers, Jennifer Santana and Horseflight.com Kendall were fast and faultless to win the class in the Rolex Stadium at the Kentucky Horse Park.

Land and Merlin were the first pair to go clear over the first round track, and they would prove to be one of only two pairs to do so. Following their initial ride, Land and Merlin immediately advanced to the jump-off and made it through the seven obstacle short course in a clear time of 32.137 seconds.

“Merlin is so fast. You just think about where you want to make turns, and he’s already going. He’s super quick. His turning ability is unbelievable,” mentioned Land.

Land and Merlin’s time would remain untouched, only coming into contest when Chelsea Moss and her own Lorena 90 successfully negotiated the first course. Moss and Lorena 90 began the jump-off round quick and clean, but a slightly slower pace and a rub over a skinny vertical would leave them with four faults and a jump-off time of 35.198 seconds. Their efforts would be good enough for the second place finish, while Eugenio Garza and Providence, owned by El Milagro of Dallas, TX, claimed the third spot with four faults and a time of 77.751 seconds in the opening round. Garza also finished fourth with four faults and a time of 79.294 seconds aboard his second mount, Milagrett, also owned by El Milagro.

Taylor Land’s sister, Frances Land, has seen great success aboard her mount Merlin, but today she turned over the reins to her sister. “Merlin is my sister’s horse, and she’s been riding him for several years. I’m in school at NYU, so I don’t get to ride very often right now. She’s nice enough to let me hop on him once in a while and get my riding fix in,” explained Land. “Merlin is a like an amazing wind-up toy. He’s so wonderful and fun to ride. I literally just got to the show this morning. Usually it would be hard for me to get on another horse and jump around like that, but he is just wonderful and easy.”

Land continued, “I love the atmosphere here. Being in that ring is amazing. I love Lexington, and everyone at this horse show is always so friendly. It’s such a wonderful horse show environment. It’s like a mini-vacation to come and show here,” concluded Land.

In the Medium Junior/Amateur-Owner Jumpers, the first place award went to Jennifer Santana aboard her new mount, Horseflight.com Kendall, or simply “Kendall.” Santana was one of six riders to advance to the jump-off after going clear in the time allowed over the opening 14-obstacle course that again utilized the same oxer-vertical double combination and vertical-oxer-vertical triple combination.

Reid Patton and her own Tissem were the first to go clear and advance to the jump-off. They successfully produced a double clear round, but Sarah Bagworth and her Mount Untouchable quickly surpassed their time of 32.032 seconds. Bagworth, of King City, Ontario, Canada, and Untouchable turned in a double a clear effort in a time of 31.273 seconds, earning them the eventual third place award.

Bagworth and Untouchable rode quickly through the course, taking advantage of some tight turns and making it appear as though their time would be tough to beat. Four trips later however, Spencer Smith and Skara Glen’s Intense, owned by Skara Glen Stables of Pittsburgh, PA, made it to the jump-off and demonstrated that the time was in fact easily attainable. They shaved nearly a second off the time to finish double clear in a time of 30.327 seconds.

Santana immediately followed Smith, turning in a meticulous first round ride and going directly into the jump-off course. She and Kendall blazed through the jump-off timers in 28.732 seconds, a time that would prove untouchable, earning them the first place position and leaving Smith in second.

“Kendall’s a new horse for me,” stated Santana. “She is 7 years old, and she is a dream. This is my second horse show with her. The first one we did was in Venice, and she just arrived in the U.S. My husband [Pablo Santana] picked her out, and she’s just been a dream from the get go. I loved the course today. I thought it was going to be tricky for me just because she has a tremendous stride, even though she’s little, but it really rode well. She waited for me everywhere, and she just gave me the best jumps that I’ve felt with her so far.”

“In the jump-off, I kind of just let her set the pace. I let her tell me how she wanted to go,” explained Santana. “I asked Pablo when I finished, ‘Is my time catchable?’ He said, ‘Always; you never know who is coming behind you,’ but I don’t think I left the door wide open. I felt like she really landed and knew where we needed to be so I didn’t have to create too much. She naturally set my track. Maybe I get in trouble from my coach saying that, but it just seemed organic. It seemed natural.”