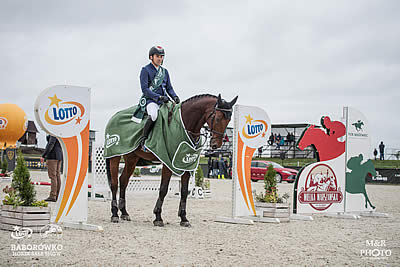 Baborówko, 27 September 2020 — On the last day of LOTTO Baborówko Horse Sale Show, riders competed not only in international classes, but also in Polish championships for seniors and young riders as well as in the Polish Cup in 4 age categories.

Yoshiaki Oiwa (JPN) was the winner of the most demanding class – the CCI4*-S for the prize of LOTTO. The athlete took the lead after Friday’s dressage, gave it away for a second to Paweł Spisak (POL) after the cross-country, and then took it back again. Second place after a great XC and one knockdown in the jumping went to Paweł Spisak (POL) with Banderas, and Harald Ambros (AUT) riding Lexicon finished third.

The CCI4*-S was also the class that determined the medalists of this year’s Polish national championships for seniors. The gold medal went to Paweł Spisak (POL) for the eighth time in his career. Mateusz Kiempa (POL) took the silver, and Małgorzata Korycka (POL) went home with the bronze.

Japanese rider Yoshiaki Oiwa (JPN) was also the best in the CCI3*-S class for the prize of Kuhn Maszyny Rolnicze. He was the author of the best dressage with The Duke Of Cavan and kept his lead throughout the three trials. Second place went to Nadine Marzahl (GER) with Vally K, and Johanna Pohjonen (FIN) was third with Conner K.

Kamil Rajnert (POL) established his leading position in the CCI2*-S after dressage with Emilia of Chin, and he kept his score until the last day. Katharina Kopp (GER) was second with Clintina, and third place went to Karolina Ślązak (POL) with Tores P. 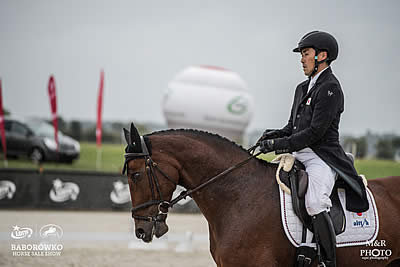 The highest-ranked class of the show – the CCI4*-S, for the prize of LOTTO – the leader after dressage is Yoshiaki Oiwa (JPN) with Calle 4. Mateusz Kiempa (POL) with Lassban Radovix currently sits in second. The CCI4*-S will also determine the medalists of Polish national championships for senior riders – Kiempa’s second place in the class makes him the leader for the moment. The athlete rode three horses in the class – he’s also currently fourth in the overall classification with Libertina. Paweł Spisak (POL) with Banderas sits in third place (and second in the championships).

Yoshiaki Oiwa is also the best rider in the CCI3*-S for the prize of Kuhn Maszyny Rolnicze – he was the author of the best dressage test with The Duke of Cavan. He also holds the fifth position with Bart L JRA. Second place for now belongs to Paweł Warszawski (POL) with Lucinda Ex Ani 4, and Maja Wyszkowska (POL) riding Sacramento is third. This position made her the leader in the Polish championships for young riders.

Josephine Schnaufer (GER) with Skyfall AS is the best rider in the CNC 100 class. Eliška Orctova (CZE) is second with Kirea, and Klaudia Kostrzewska (POL) with Ivory ES is third.

Mariusz Kleniuk (POL) is the leader after dressage in the CNC 90 with Weppetano M. Diana Jaroszkiewicz (POL) with Intuicja Koński Gaj sits in second, and Carmen Peussa (EST) with Corda is third. 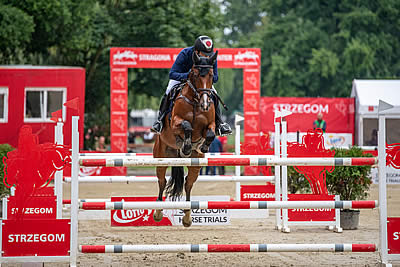 Yoshiaki Oiwa with the 12-year-old Tullyoran Cruise JRA was the best rider in the CCI4*-L class, the most difficult one at LOTTO Strzegom Horse Trials.

Oiwa was victorious after a clear round in the showjumping, beating the leader after two trials – Jonelle Price from New Zealand, who had one knockdown. Tim Price, the current number two in the FEI rankings, did not keep his lead after dressage and even a clear jumping round didn’t compensate for the time penalties he got in the cross-country trial. The Kiwi rider finished fourth, and his wife Jonelle was second with Grappa Nera and third with McClaren.

The only Polish combination in the class – Paulina Maciejewska with Jangcy L – finished sixth.

The win in the CCI3*-L class belonged to German rider Julia Mestern with Monarts Masterpiece. Second place went to her teammate Malin Hansen-Hotopp with Quidditch K, and Merel Blom from the Netherlands was third on Crossborder Radar Love.

The best athlete of the CCI2*-L was Merel Blom with Corminta vom Gwick. The next two places on the podium were taken by German riders: Andreas Dibowski with Calahari before Katarina Tietz with Chapeau Claque 49.

The podium of the CCIP2*-L class for ponies was dominated by German athletes. Jule Krueger was the best with Steendiek’s Max Edition, Pita Schmid with Sietlands Catrina was second, and third place went to Linn Zepke with Betty Boo 14.

More than 217 horses from 17 countries competed in 11 classes at this year’s LOTTO Strzegom Horse Trials. 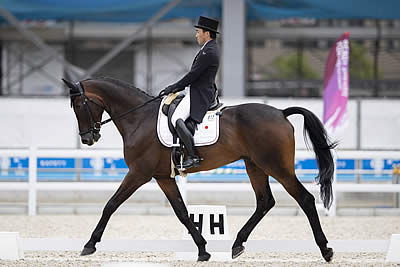 Japan’s Yoshiaki Oiwa is no stranger to success, having claimed double gold at last year’s Asian Games in Jakarta (INA), and the three-time Olympian has put down a strong marker for the home side by taking the early lead after the Dressage phase at the Ready Steady Tokyo test event.

Riding the talented Bart L JRA, previously ridden by Frenchman Matthieu Lemoine on the gold medal team at the Rio 2016 Olympic Games, Oiwa earned top marks from all three judges to lead the field on a mark of 24.5. The 43-year-old has been based in Europe for almost 20 years, but his heart lies in Japan.

“I’m a home country rider and I’ve been based in Europe for the last 18, 19 years,” he said after his Dressage performance here at the Equestrian Park. “So many people are supporting and helping me, but they’ve never seen what I’m doing, so this is a very very good chance to show what I’m doing and what this sport is about. Hopefully we can do the best performance and all the Japanese people do their best and get medals.”

The top five are all under 30 penalties, with Japan’s Ryuzo Kitajima and Vick Du Gisors JRA fourth on 28.2 and Germany’s Peter Thomsen with Horseware Nobleman fifth with 29.50.

Kuzuma Tomoto is another of the contingent flying the flag for Japan and he sits in sixth with Tacoma d’Horset on 30.4, a single point but three places ahead of his trainer, British legend William Fox-Pitt with Summer at Fernhill.

The Japanese athletes are increasingly a force to be reckoned with, finishing fourth and just out of the medals at last year’s FEI World Equestrian Games™ in Tryon (USA). Looking ahead to Tokyo 2020, Tomoto commented: “Our team is really tough and has got strong quickly. We’re aiming to get a medal; that’s why we have to improve more and more. We have lots of nice riders so we can do it for sure.”

Final horse into the arena, GHS Calvaruise ridden by Kazuya (JPN), has now been withdrawn after placing last of the 17 starters in Dressage on 40.8. The rest of the horses have been transported to the stables at Sea Forest where they will spend the night before cross country.

Derek Di Grazia’s 3,025 metre track incorporates 20 fences with 31 jumping efforts, but the American designer is giving nothing away about his track for the 2020 Games. Even so, the 20 National Olympic and Paralympic Committees that are onsite for the official observers programme are making the most of the opportunity to see the terrain at Sea Forest and test the facilities at both venues.

On Wednesday, action returns to the equally stunning new facilities at Baji Koen, site of the Olympic equestrian events at the 1964 Tokyo Games, for Wednesday’s final Jumping phase.

The Baji Koen refurbishment has been funded independently by the Japan Racing Association and will provide an extraordinary legacy for the residents of Tokyo, as will the park that will be created on the reclaimed land at Sea Forest, which also hosts rowing and canoe sprint next year.

London (GBR), 29 July 2012 – Japan’s Yoshiaki Oiwa and Noonday de Conde produced a sensational test to take the individual lead in the closing stages of Eventing dressage at the London 2012 Olympic Games in Greenwich Park (GBR) today. The quiet-spoken 36-year-old admitted afterwards that he could hardly believe it. “I’m a bit shocked,” he said at the post-competition press conference. “Nobody expected it – as you can see there are not many Japanese media here!” On an extraordinary day, it was Italy’s Stefano Brecciaroli who slotted into second place while New Zealand’s Mark Todd moved into third. Both Oiwa and Todd’s results proved pivotal for their teams, with Japan rising to fill sixth place in the team rankings behind the Kiwis, who go into tomorrow’s cross-country phase in joint-fourth along with Sweden.

As it stands tonight, the host nation lies third behind Australia in second while the defending champions from Germany are already out in front. But with just three penalty points separating the first two, and the British less than five points adrift, stalked by the Swedes and Kiwis just 1.2 points further behind, there is very little in it. As German Chef d’Equipe and Coach, Hans Melzer, said this evening, “The four top riders are just one point away from each other and the teams are so close. They might as well start tomorrow on a zero score. Psychologically today’s result is good and our team did a super job and I’m happy for that, but tomorrow is another day.”