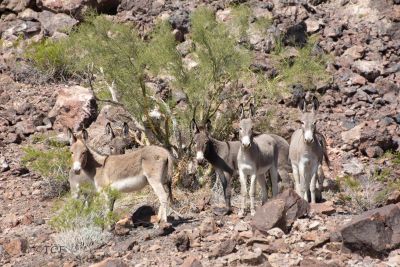 America’s wild burros face a genetic crisis due to the Bureau of Land Management’s (BLM’s) mismanagement of these hardy little animals. The agency keeps most burro populations so small that inbreeding is inevitable.

The only way to address this is to reduce livestock grazing and increase the number of burros on the range.

BLM’s unscientific “Appropriate” Management Level (AML) stands in the way of this humane alternative to roundups. In this rigged “AML” system, any animal over BLM’s arbitrary quota is considered “overpopulation.”

The BLM plans to decimate the Sinbad wild burro herd — removing 230 of the 290 burros. Leaving just 50 to 70 animals in the herd is literally “managing” the Sinbad burros to slow extinction. 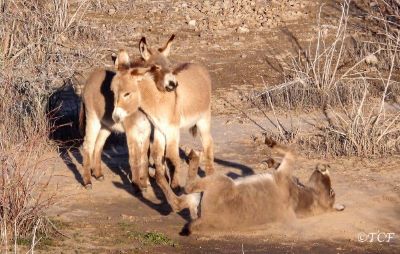 Last month we told you about the Bureau of Land Management (BLM) plan to eliminate burros from their own lands in California. NOW the agency is working to decimate the wild burro herds of Southern Nevada.

America’s wild burros just can’t get a break. BLM’s mismanagement keeps them at such low population levels that these gentle but hardy animals now face a genetic crisis.

PLEASE take a moment to speak up for the wild burros – and wild horses – of Nevada’s Lake Mead Complex.

Silence is complicity, so we MUST stand up and be heard. We can’t let America’s few remaining wild burros go without a fight! 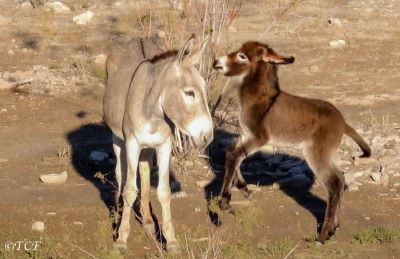 Dr. Cothran attributes this crisis to burro populations too small to be considered viable. Massive BLM roundups have reduced burro herds to such small numbers that inbreeding is inevitable. Destroying the genetic health of our remaining herds dooms them to inevitable extinction.

BLM California is mounting yet another aerial assault on these gentle animals. Helicopters will swoop down in an attempt to eliminate all burros from more than 560,000 acres of our BLM-managed public lands south and west of Death Valley: Centennial Herd Management Area, Slate Range, and Paramint Herd Areas. Nearly 1,000 burros will lose their freedom if this ill-conceived plan moves forward.

We need your voice! Please take action NOW to oppose to this horrific plan.

The Cloud Foundation is calling on newly-confirmed Interior Secretary Deb Haaland to halt roundups and conduct an independent evaluation of the broken Wild Horse and Burro Program.

Record numbers of our wild horses and burros are currently warehoused in government holding facilities — more than 53,000 animals. By halting the roundups, we can work together to create win-win solutions and establish a fair and humane program that will benefit wild horses and burros, the range, and American taxpayers.

This Is Why We Fight!

Sometimes, we all need a reminder of why we we’re in this fight. In honor of the California burros who stand to lose their freedom, we bring you a delightful short video. Burros are gentle, playful animals, as you can see. Enjoy! 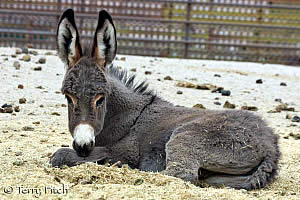 Burros have long endured lack of respect from humans, but lately the barbs have become mean as well as misguided. Mojave County Supervisor called for shooting wild burros, later explaining he simply wanted to pressure the Bureau of Land Management (BLM) to take action. Arizona Senators John McCain and Jeff Flake called for a Congressional hearing, saying burros’ “out of control” population growth burdens taxpayers. Arizona Game and Fish Commission (AGFC) Chair Kurt Davis proclaimed they do untold harm to “native wildlife and communities” and that AGFC should round up these trespassing “invasives.”

The facts beg to differ.

Burros first arrived in the Americas centuries before the USA was born. They packed along southwestern trails beginning in the late 1700s. They transported goods and firewood, and helped open new, previously inaccessible towns. They hauled prospectors’ equipment to remote mines. Some became blinded from working underground. Eventually, they were turned loose to fend for themselves.

These wily, sure-footed animals adapted to the stark landscape. They became one with the desert and canyons, their mournful cries echoing at night through the wilds. They graze on lower quality forage, and dig deep water holes that benefit bighorn sheep, mule deer and other species. Although cattle and other livestock vastly outnumber wild burros on public lands, the long-eared equines are scapegoated for range degradation. Not one validated study has demonstrated that wild burros destroy fragile habitat. The myth persists, because it suits a certain political narrative.

Under the 1971 Wild Free-Roaming Horse and Burros Act, wild burros and mustangs are to be protected on the lands where they roamed as “living symbols of the historic and pioneer spirit of the West” that “contribute to the diversity of life forms… and enrich the lives of the American people.” The BLM’s first count in 1974 showed an estimated 15,000 burros in the West. Today, fewer than 11,000 remain in government-managed herd management areas (HMAs). 1,314 captured burros are incarcerated in dismal, costly government holding corrals.

The Black Mountain HMA, Arizona’s largest, contains over one million acres. In 2013 the BLM stated there were 700 wild burros in this herd area. Today, the Agency claims there are over 1500. And they want that number reduced to a population target (appropriate management level or AML) of 478, or one burro per 2000 acres. At this reported growth rate, the Black Mountain burros would be miraculously fertile. Yet the BLM has never conducted an accurate, credible census. In 2013, the National Academy of Sciences (NAS) urged the BLM to revise all its AMLs based on rigorous, up-to-date population statistics and genetic testing to assure viability of the herds.

This was not done.

The BLM is not the main culprit. Livestock ranchers, trophy hunters, oil and mining company owners often view public lands as their private domain. Many commercial interests fight reform and pressure the Agency to get wild equines out of the way. In contrast, local communities and tourists appreciate the burros. It’s time for stakeholders to defend the public interest and preserve these long-eared equines that are living legends of the West. There’s a better way to coexist:

By CHARLOTTE ROE as published on The Desert Independent