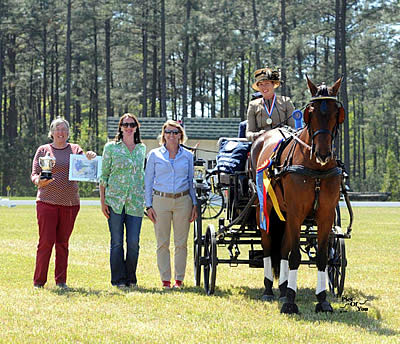 Raeford, N.C. – A field of seven talented combinations vied for top honors over the weekend in the 2016 USEF Single Horse Driving National Championship held at the Southern Pines CDE. Suzy Stafford and PVF Peace of Mind led from start to finish to claim their second consecutive National Champion title, finishing on a score of 134.17. In addition to the championship, the CAN2* Single Horse and Four-in-Hand divisions served as Selection Trials for this summer’s FEI World Driving Championships.

Stafford (Wilmington, Del.) drove a beautiful dressage test with her own PVF Peace of Mind on Friday to begin her quest for the championship title. She and the 2007 Morgan Mare displayed excellent trot work, quality canter work, and impressive halts to win the dressage phase with a score of 37.60 from the Ground Jury of Sarah Mullins (IRL), Debbie Banfield (USA), and Sem Groenewoud (USA). The pair delivered a great marathon performance over Richard Nicoll’s challenging track around the Carolina Horse Park to win the phase with a score of 87.32. Stafford and “Hunny” had some bobbles in obstacle four, the Pine Trees, but had the fastest times of the division in obstacles three, the Wood Pile, seven, A Bridge Too Far, and eight, the Gum Tree Wheel. In Sunday’s cones phase, Stafford and her 2015 USEF International Horse of the Year partner had balls down at the A element of three and four and 3.25 time penalties, totaling 9.25 penalty points. However, the combination had a significant lead going into the final phase, allowing them to win the title.

“It wasn’t as lovely looking as I had planned it to be. She was quite full of herself and had her own idea of what the course should be. She thought she walked it instead of me,” Stafford said with a smile. “Luckily I had a decent lead since we had two balls down, and that gave me a little breathing room. Certainly not what you want to rely on, but it was what I had today.”

Stafford will give PVF Peace of Mind a short break, then plans to head to Europe this summer with the aim of representing the U.S. at the FEI World Driving Championships for Singles.

Reserve Champions Leslie Berndl (Newcastle, Calif.) and Uminco performed a flowing dressage test, highlighted by powerful canter work and smooth deviations, which earned them a score of 41.87. Berndl and her own 2001 KWPN gelding had a solid marathon phase, finishing the phase in third place on a score of 90.44. The duo struggled in obstacle four, but made light work of the rest of the course, allowing them remain in second place overall. In the cones phase, Berndl and Uminco had an unlucky ball down at one but no time penalties, adding only 3.00 penalty points to their overall score and winning the phase. They finished the championship with a total score of 135.31.

Sterling Graburn (Paris, Ky.) and his and Laura Corsentino’s Mannkato had a respectable dressage test with a great rein back and wonderful deviations to receive a score of 47.38. Graburn and 2001 Dutch Harness gelding executed a brilliant marathon phase and scored 87.68 after having the fastest times of the day in obstacles one, Cool Breeze, four, the Pine Trees, five, The Bird Bath, and six, The Gates. Their marathon performance allowed them to move up from fourth to third place overall. Graburn and Mannkato had four balls down for 12.00 penalty points in the cones phase to end on a score of 147.06 for third place in the championship.

In the CAN2* Four-in-Hand division serving as a Selection Trial, James Fairclough (Newton, N.J.) had a nice dressage test with his team, aside from an error, to score 50.43. He had a great marathon day, winning the phase with a score of 126.12 and having the fastest time in six of the seven obstacles. Fairclough and his team ended their weekend with an excellent cones phase, having no balls down and 8.87 time penalties, winning the phase as well as the division on a score of 185.42.

“I liked starting my season here. I think starting in February can make for a very long season. Dressage was very good, except when I had a little blip there that cost me five points, but it is early in the year. The marathon went well. I had some tight turns I wanted to test. The cones course was extremely tight and it went really well; I’m really excited about that. I’m very pleased; the horses all looked great,” Fairclough said.

Josh Rector (Dyke, Va.) delivered a solid dressage test with his team to score 52.25. He had an educational marathon phase with a score of 180.38, having the fastest time in obstacle five. Rector had four balls down and 21.66 time penalties to finish second in the division in the cones phase with a final score of 266.29.

Find out more about the Southern Pines CDE and view results. 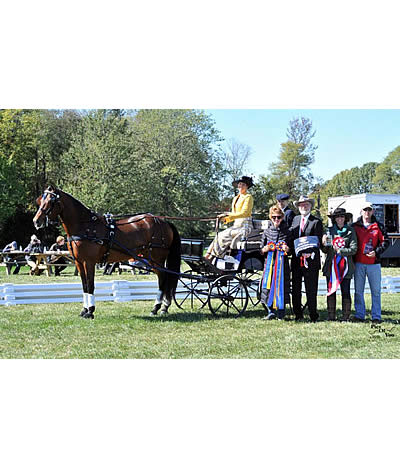