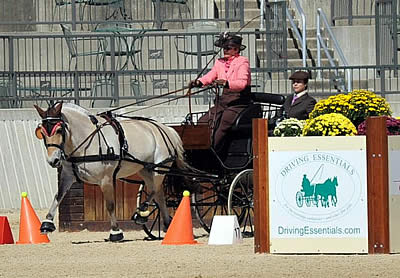 Berndl (Newcastle, Calif.) and Sweetwater’s Zorah Belle began their quest for a national title with a lovely dressage test to win the phase with a score of 53.69 from the Ground Jury of Anne-Marie Turbe (FRA), Elimar Thunert (GER), and Kail Palmer-Miller (USA). Berndl boldly drove Teressa Kandianis’ 2004 Norwegian Fjord mare in the marathon phase, having the fastest times in four of the seven obstacles designed by Richard Nicoll (USA). They won the phase and added 86.19 penalties to their score. Despite the fact that less than three points separated first and second place, Berndl and Sweetwater’s Zorah Belle kept their cool in the cones phase to have a double-clear round and earn the USEF Single Pony Driving National Championship title with a final score of 139.88.

“The whole championship was wonderful. We drove out from California; it’s 49 hours. She is an inexperienced pony with traveling, but she handled the trip really well,” Berndl explained. “The dressage was super; I was really, really happy with her in a hard test. The marathon was very challenging, especially for a smaller pony because she is only 13.2 hands. She handled the marathon like it was nothing. In the cones, it was a long course and I really wanted to make sure to keep the speed up. We went in with 2.58 points separating us from Tracey [Morgan], who is a National Champion already, so there was a lot of pressure and I just had to guide her around and let her do it; she stayed calm and cool. She gave 100% of everything she had in every phase.”

Two-time National Champion Tracey Morgan (Beallsville, Md.) and longtime partner Fuego 88 collected Reserve Champions honors after an excellent performance throughout the weekend, beginning with a smooth dressage test that scored 54.04. Morgan and her own 2001 German Riding Pony gelding were determined on the marathon course, having a bobble in obstacle three but rallying to finish with 88.42 penalties. They ended the competition with an impressive double-clear cones round to win the phase and solidify their Reserve Champion title with a final score of 142.46.

Rebecca Gutierrez (Windsor, S.C.) and Naria BW6, Richard Olson’s 2003 Haflinger mare, finished in third place with a final score of 152.44. The duo scored 61.51 in the dressage phase and collecting 90.02 and 0.91 in the marathon and cones phases, respectively.

Whaley (Paris, Ky.) drove her own and Barbara Sims’ Welsh geldings to win her first USEF Pair Pony Driving National Championship title, winning each of the phases along the way. She had a wonderful dressage test, scoring 49.67 to take the early lead. Whaley attacked the marathon course with her pair and had the fastest times in all of the obstacles, collecting 90.25 penalties. They delivered another quality performance in the cones phase with a single ball down at obstacle nine for 3.00 penalties, winning the championship with a final score of 142.92.

“They were amazing. These two [Tommy and Tanner] are full brothers and they do marathon and cones, but my newest one [Night Flyer] that I have borrowed from a friend, Barbara Sims, this was his first competition as a pair in the dressage and he was a machine,” Whaley said of her ponies. “The dressage is what I was really concentrating on and that was the best score I have gotten in a very long time, so that was really fun. The marathon I hit about three-quarters speed because I was trying stuff with them and I just wanted to keep them quiet, and they were great, and the cones phase was good.”

Jennifer Matheson (Aiken, S.C.) and Katrina Becker and Mary Anne Boyden’s mixed pair began the championship with a respectable dressage test for a score of 58.13. Matheson and the ponies had a solid marathon performance, collecting 102.42 penalties and finishing second in the phase. They closed out the competition with three balls down in the cones phase for 12.00 penalties, finishing second in the phase and obtaining Reserve Champion honors.

Find out more about the Kentucky Classic CDE and view the complete results.