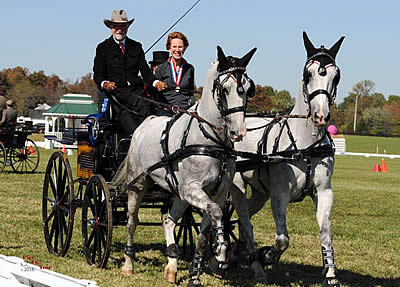 “I’ve got a new young pair of Dutch Warmbloods that I found in Hungary. One of them is hotter than the other. I really had one of the best dressage tests I’ve ever had, regardless of the score; I felt really good about it,” Wilson explained. “I was able to keep the impulsion up and they have got beautiful extension. I pushed them a little too far and we broke to a canter in the last [extended trot movement], but that was my fault.”

He and his own mixed KWPN and Lippizanner pair put forth a determined effort over the tough marathon course designed by Barry Hunter (GBR), winning the phase with a total of 95.67 penalties and having the fastest times in four of the seven obstacles.

“In the marathon, I put in a different horse, a Lippizzaner I have had for quite some time and a real powerhouse, taking the youngest and most sensitive horse out. I had a really good marathon; I had one bobble in obstacle six, but I felt really good about my time and how well they responded.”

Wilson clinched the 2016 title following Sunday’s cones phase. His lead going into the final phase came in handy as he had three balls down for nine penalties and 6.13 time penalties over the challenging track. Wilson won back-to-back titles with a final score of 160.59.

“Today in cones, I put the two Dutch Warmbloods back together, and Dario was really hot and really wanted to go. If I could’ve had just a bit more control I think I could have kept from hitting a couple balls. I had a nice lead and I knew I could afford three [balls].”

U.S. Driving Coach Thorsten Zarembowicz pointed out that Wilson had three different horses from the last time he won the national title, making Wilson’s win quite impressive. “In one year he achieved the same goal with three different horses, which in my mind, is the toughest part to work out. Normally you change one horse out, get another one in, but Steve has come so far that he can drive a different pair just as well.”

As co-owner of Hermitage Farm with his wife Laura Lee Brown, Wilson felt the stress competing for the championship title on his home turf. “For me, the idea of losing the second time around here at home in front of my friends made me more intense on myself and feel the pressure. Being the host of an event and competing is really difficult, but my wife and I love hosting and it is getting better every year.”

Chet Halka (Millstone, N.J.) started off the weekend with a solid dressage test that received a score of 54.51. He and his own KWPN and Oldenburg pair had a strong marathon performance, collecting 101.66 penalties and having the fastest times in three obstacles. In the cones phase, Halka left all the balls up, but had 7.59 time penalties. His performance was good enough to win the cones phase and earn the Reserve Champion title with a final score of 163.76.

Joan Fernandez (Murrieta, Calif.) and her own Friesian pair had a respectable dressage test to receive a score of 67.55. They had a steady marathon round to tally 174.82 penalties. Fernandez and her pair finished out the competition with four balls down for 12 penalties and 20.8 time penalties in the cones phase, finishing third with a score of 275.15.

Find out more about the Hermitage Classic CDE and view complete results.