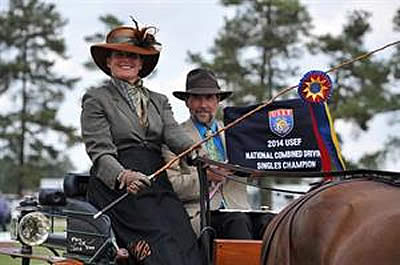 Raeford, N.C. – The 2014 USEF National Single Horse Driving Championship came to an exciting conclusion on Sunday in the cones phase of the Southern Pines CDE. On another beautiful day at the Carolina Horse Park, 2013 Champion, Leslie Berndl, held her nerve to drive a near flawless effort over Richard Nicoll’s cones course to retain the title.

Berndl (Newcastle, Calif.) and 13-year-old KWPN gelding Uminco were the final competitors to tackle the cones course in the championship finishing within the time allowed and only dislodging two balls to add six points to their overall score. They finished on a total of 119.67 on weekend that surpassed expectation for the World Championship veteran.

“It was amazing, just amazing,” said the back-to-back Champion of her time at the Southern Pines CDE.

Berndl spent the winter training and competing in Florida and came to the Carolina Horse Park with her sights firmly set on claiming the 2014 title.

“It doesn’t feel real,” said of Berndl of winning the USEF National Single Horse Driving Championship for the second time.

Earning Reserve Champion honors was Suzy Stafford (Wilmington, Del.) and PVF Peace of Mind on a score of 122.43. The 2011 FEI World Driving Championships for Combined Ponies Individual Silver medalist and her own seven-year-old Morgan mare added 2.8 time faults and three penalties for a single ball down on the cones course to finish less three points behind Berndl.

Finishing in overall third place were Donna Crookston (Saltsburg, Pa.) and her own 18-year-old Morgan gelding RG Cowboy’s Black Cadillac on score of 140, rising one place after the marathon as the only entry to drive double clear on the cones course in the Single Horse division. 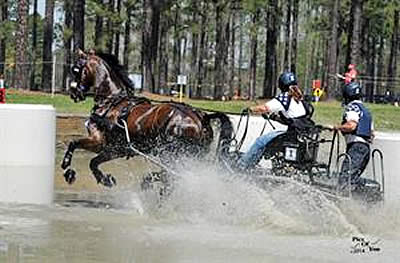 Raeford, N.C. – The marathon phase of the USEF National Single Horse Driving Championship, which is being held in conjunction with the Southern Pines CDE, proved to be a back-and-forth battle between two of America’s most experienced drivers. Leslie Berndl and Suzy Stafford traded quick times through Richard Nicoll’s eight-obstacle marathon course on a picturesque day at the Carolina Horse Park. While Stafford was able to capture victory on the marathon, it is Berndl who will drive last in the cones as the leader of the National Championship at the conclusion of two phases of competition.

Berndl (Newcastle, Calif.) and her own 13-year-old KWPN gelding, Uminco, headed onto the marathon with the overnight lead after winning the dressage with a score of 34.24, and a 4.65 lead over Stafford. The 2013 USEF National Single Horse Driving Champions posted competitive scores throughout each hazard including driving the fastest time in obstacle two and placing second in obstacle four. Additionally, they continued their pursuit to back-to-back titles by driving the third quickest times in obstacles one, five, six, seven, and eight on their way to finishing the marathon on a score of 79.43 in second place.

Berndl heads into the final cones phase on a total score of 113.67, giving her more than a three-point cushion over the field.

Stafford (Wilmington, Del.) and her own PVF Peace of Mind currently stand in second place in the Championship with score of 117.35. The three-time USEF Single Pony Champion, utilized her vast experience with the seven-year-old Morgan as they won the first and third obstacles, and posted second-place scores in obstacles five, six, and seven. On their way to winning Saturday’s marathon on a score of 78.76, the Live Oak International winners also placed third in obstacle four.

Kate Shields (Middleburg, Va.) held her third place overall standing with her own 13-year-old Welsh Cob gelding, Hastening Winslow, on a two-day score of 138.78, after placing seventh on the marathon with a score of 95.64.

Championship competition comes to a close on Sunday with the cones phase. 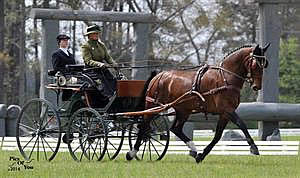 Raeford, N.C. – Competition at the Southern Pines CDE officially got underway on Friday at the Carolina Horse Park with the USEF National Single Horse Driving Championship closing out the day. Following the completion of the dressage phase, Leslie Berndl holds the early lead after an impressive test that earned high marks from the Ground Jury of Peter Bonhof and Martha Hanks Nicoll.

Reigning National Champion, Berndl (Newcastle, Calif.), entered the ring on a mission, looking to head out on Saturday’s marathon in pole position. Driving her own 13-year-old KWPN gelding Uminco, she produced a flowing performance which was highlighted by powerful trot-work and solid transitions to score 34.24.

Berndl and Uminco will head onto the marathon with more than a four-point lead over the rest of the field.

Driving into second place on Friday were Suzy Stafford and PVF Peace of Mind on a score of 38.59. The 2011 FEI World Driving Championships for Combined Ponies Individual Silver medalist and her own seven-year-old Morgan mare lay within striking distance of clinching their first USEF National Single Horse Driving Championship title with two phases left to drive after an expressive test on Friday.

Kate Shields (Middleburg, Va.) drove her own 13-year-old Welsh Cob gelding, Hastening Winslow, into third place on Friday with a score of 43.14. 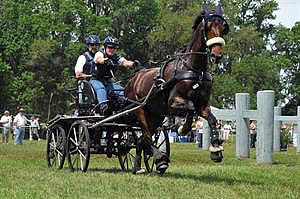 Raeford, N.C. – A talented field of 11 drivers descends upon Raeford, N.C., this weekend as they look to lay claim on the 2014 USEF National Single Horse Driving Championship. The annual championship will be held in conjunction with the Southern Pines CDE, April 11-13, at the Carolina Horse Park. Competition gets underway Friday with the dressage, with drivers heading out on the marathon course the following day. Sunday hosts the final phase of competition as the 2014 champion will be crowned at the conclusion of the cones.

Reigning USEF National Single Horse Driving Champion Leslie Berndl (Newcastle, Calif.) and her own 13-year-old KWPN gelding Uminco head to the Carolina Horse Park with their sights firmly set on retaining their title. They come into the weekend in strong form after earning a victory at the Kingdom of the Sun CDE and second-place finishes at Sunshine State and Live Oak this winter.

Additionally, a pair of former USEF National Combined Driving Single Pony Champions looks to earn their first Single Horse National title. Suzy Stafford (Wilmington, Del.) has three Single Pony Championship titles (2004, 2008, and 2009) to her name and heads into the weekend with her own seven-year-old Morgan mare PVF Peace of Mind after having won at Live Oak three weeks ago. Sara Schmitt (Flemington, N.J.) earned the Single Pony title in 2005 and 2007 and looks to add a Single Horse Championship to her resume. She and her own eight-year-old Friesian Heritage mare Savannah enter Southern Pines after having earned seventh- and sixth-place finishes at Kingdom of the Sun and Live Oak, respectively.

Also lining up this weekend is 2011 USEF Junior Equestrian of the Year, Jacob Arnold, who has been training with Four-in-Hand National Champion Chester Weber as part of the Live Oak Combined Driving Developing Driver Program. Arnold (Snow Camp, N.C.) and IJsbrand Chardon’s 11-year-old KWPN gelding Whopper have been enjoying a 2014 season earning a fifth-place finish at Kingdom of the Sun and driving to third place at Live Oak.

This weekend will be doubly important for Single Horse drivers as it also serves as a Selection Trial for the 2014 FEI Single World Driving Championship.