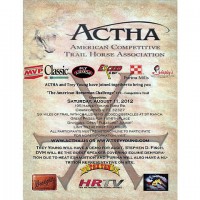 Trey Young from HRTV and ACTHA (American Competitive Trail Horse Association) have partnered together to host “The American Horseman Competition” scheduled for 11 August, 2012.  All horseback riding disciplines are welcome and we would like to cordially invite you and your friends to compete.   This competition is thought provoking and consists of 6 miles and 6 judged obstacles.  Trey Young will have a demo for audit and Dr. Stephen Fisch DVM from AVS Equine Hospital will be our guest speaker. In addition, there will be over-night boarding for Friday night arrivals, amazing prizes, ribbons and of course wonderful fellowship with fellow horse people and their family & friends throughout the day.  Registration is limited to 100 riders.  This is also a CASH Jackpot Ride!

To learn more about the ACTHA please visit: www.actha.us or Trey Young at http://treyyoung.com/.

Trey Young, “The American Horseman,” has been busy planning and promoting his new television series airing on HRTV Dish Network 404. While creating his schedule, the horseman has reserved many dates along the way for future clinics. Young has been hosting clinics at his 3-Y Ranch in Crawfordville, FL for nearly 4 years. His clinics range from confidence on the trail, to cow work, to basic horsemanship.

Trey’s next clinic is a basic horsemanship clinic set for June 25th-26th. This clinic is designed for all levels of horsemanship. Young will assure that you leave this clinic with renewed confidence and understanding, resulting in a stronger bond and partnership between you and your horse. Regardless of your skill level, this clinic promises something new, fun, and helpful for everyone that attends.

This basic horsemanship clinic will feature some ground work as well as more saddle time to get your horse to better understand your cues. From start to finish the rider will focus on improving everything for themselves, and their horse. Clinics are limited to small sizes to ensure each person gets the one on one time they need. If you would like to attend a clinic, but don’t have a horse, one can be provided for an additional fee.

END_OF_DOCUMENT_TOKEN_TO_BE_REPLACED

ARCADIA, CA — HRTV (R) has treated equestrian fans to some of the sport’s greatest trainers and clinicians over the past year, and it will introduce another talented trainer, Trey Young, in his first television series ever — “Trey Young, An American Horseman” — to its viewers, beginning on Tuesday, March 8. The first in a series of Young’s valuable lessons will debut at 10:30 p.m. ET/7:30 p.m. PT. Shows highlighting Young’s expertise will continue on successive Tuesdays throughout March. An accomplished, relatively new face on the training scene, Young will be welcomed to HRTV from the family’s 3-Y Ranch in Crawfordville, FL, exhibiting a “natural horsemanship” style that encourages and fosters success for both the rider and horse. In the premiere weekly installment, viewers are introduced to Young as he begins training a precocious 2-year-old for its first-ever trail ride. In a later show, Young urges, but patiently guides, a 2-year-old through water on its first trail ride. In the weeks ahead, Young takes horses through an obstacle course, consisting of sinkholes, tunnels, and cowboy curtains. In addition, future episodes will feature Trey prepping a young equine protégé on the art of “Cutting.” “Team Roping” will also comprise a show, as Young and longtime friend, J. D. Elliott, demonstrate legal catches and conclude by “scoring a few steers.”

HRTV is a 24-hour, television-based multimedia network dedicated to horseracing which features racing action from the world’s greatest racetracks. HRTV also features other forms of equestrian competition, as well as original programming and award-winning documentaries covering a variety of racing and general equestrian topics. The live stream of HRTV is available on a subscription basis to high-speed Internet users worldwide at www.hrtvlive.com. The HRTV television network is presently available via cable, telco video and satellite in approximately 19 million U.S. homes. This is a new series starting Tuesday, produced and directed by an Ocala company. Brenden Martin and Jason Fugazy’s 26-part series on HRTV starts Tuesday night and features a real, authentic cowboy whose unique style of training has caught the attention of a national following.