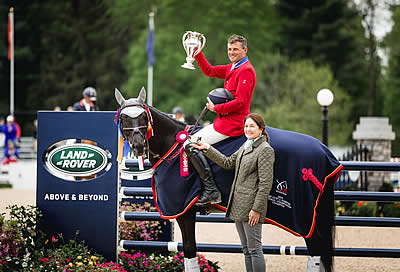 Martin and Tsetserleg (Photo by Alex Banks for US Equestrian)

Lexington, Ky. – In the culminating phase of the Land Rover Kentucky Three-Day Event presented by MARS EQUESTRIAN (LRK3DE), Boyd Martin and Tsetserleg jumped a nail-biting clear round around Richard Jeffrey’s course to finish on their dressage score of 27.9. Finishing second overall behind defending LRK3DE champions Oliver Townend and Cooley Master Class from Great Britain, Martin (Cochranville, Pa.) and the 12-year-old Trakehner gelding owned by Christine Turner put in a masterful performance from start to finish in their second LRK3DE together to win the Land Rover/USEF CCI5* Eventing National Championship presented by MARS EQUESTRIAN.

“I was thrilled with my bloke today. [Tsetserleg] doesn’t give you the most confidence in the warm-up, he was jumping all over the place and twisting and I heard these two [Townend and Tim Price] giggling at me in the warm-up,” joked Martin. “But [Tsetserleg] is a great little horse. He gets in the ring and a bit like Tim [Price’s] horse, just spooks that little bit; I do have to say, I think he loves a bit of atmosphere and the crowd. He tapped the first fence a bit and I thought, ‘Aw crap, this is going to be a long round,’ but at the second fence he really tried, and then I thought, ‘Oh, I’ve got a shot here.’

“He’s been a bit difficult in the combinations. He usually jumps really, really big over the first part and gets too close to the second part, so I felt like I had to really come in slow and short to the fence 4ab,” continued Martin. “Once he cleared [4ab], I knew I was in for a chance at a clear round. But all in all, I couldn’t be happier or more satisfied. … This year he has come out blazing. He exceeded my expectations and I think he is only going to grow and get better from this event.”

In front of a crowd of approximately 23,000 on Sunday, and nearly 100,000 over the course of the four days of LRK3DE competition, the five top-placed combinations jumped clear rounds in the final phase. Going head-to-head for the top spot, Townend, Martin, and New Zealand’s Tim Price made it an exciting competition to the very finish.

As the highest-placed Americans, Martin and his FEI World Equestrian Games ™ (WEG) Tryon 2018 mount earned the Roger Haller Trophy for the national championship after their clear jumping round, a double-clear cross-country effort, and their second-best dressage score. Doug Payne (Aiken, S.C.) and Vandiver, a 15-year-old Trakehner gelding owned by the rider, Jessica Payne, and Debi Crowley also jumped a clear round, earning them the reserve national championship title.

In their third LRK3DE together, and Payne’s fifth, Payne and Vandiver’s fifth-place standing overall is the highest that Payne has achieved at the LRK3DE, with a score of 35.9 and a cross-country ride with just a single second over the optimum time.

“[Vandiver] is one exceptional creature,” said Payne. “He is pretty much a seeing-eye dog. You get him in the rough proximity [to the jump] and he is there to help you out. You wouldn’t ask for a better horse to head out on.”

Defending his 2018 title, Townend and Cooley Master Class became only the fourth combination in the history of the LRK3DE to win back-to-back years, finishing on a score of 25.3 after jumping a clear-round of stadium jumping. Price and Xavier Faer held onto their number-three position, jumping a clear round as well to finish on their dressage score of 30.9.

Five American combinations would finish in the top-ten of the LRK3DE. In addition to Martin, Payne, and Dutton, Lauren Kieffer (The Plains, Va.) finished eighth and ninth with Jacqueline Mars’s Paramount Importance, a 12-year-old Holsteiner gelding, and Vermiculus, a 12-year-old Anglo-Arabian gelding, on scores of 46.0 and 46.6, respectively.