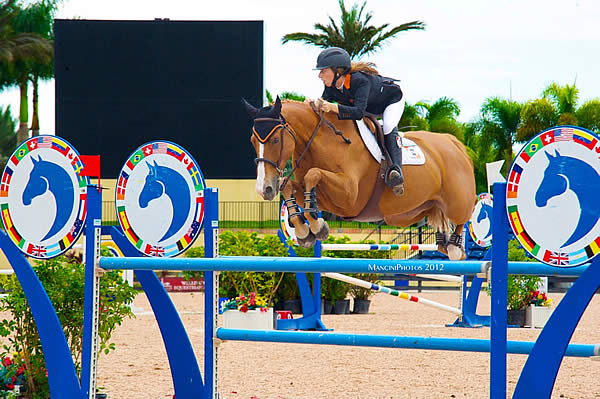 JUNE 10, 2013 – Teenage show jumping talents Daniela Stransky, Mario Gamboa and Jose F. Bonetti are among the young riders who help raise funds and awareness for the non-profit Step by Step Foundation (www.stepbystepfoundation.com) throughout the year. These riders and others who support the international non-profit will make a guest appearance on Speaking of Horses, which premieres on cable television on Pegasus TV and Horse Talk TV (check local listings for times and channel) as well as on radio and through the internet at www.speakingofhorses.com on Saturday, June 15, 2013.

On air host Wayne Williams will chat with charity founder Liliane Stransky and grand prix rider Hector Florentino about how this new generation of equestrian stars is affecting people’s lives globally.  “We love the chance to reach new people,” stated Stransky, who also owns Stransky’s Mission Farm in Wellington, Florida.  “The kids are always spreading the word at the shows, helping to get other riders, trainers and owners to get involved.  It’s a lot of legwork in between classes, but they are incredibly motivated young riders. As guests on the show, we’ll be able to reach an entirely new group of horse fans! Of course, we’d love to meet them in person in Kentucky or Colorado where we’ll all be showing this summer.  But just by tuning in they can find out what we are doing with Step by Step and learn how, if they’d like, they can get involved without having to leave their computer or couch!  That way is a lot easier on the feet than trying to find us on the grounds!”

In addition, Speaking of Horses will include exciting footage of many juniors and grand prix veterans including Florentino, who both the rider/trainer at Stransky’s stable and long standing supporter. “It is a great feeling when you can combine what you love to do the most, which is riding, showing and training, with helping children and communities in need,” explained Florentino, one of the charity’s biggest assets, sporting the Step by Step logo and winning in the big money grand prix classes.  “Watching these youngsters coming up through the makes me very proud. I see they are not only good riders and horsemen, but while they are still young are proving they are good people too.”

“Watching these amazing kids from varied backgrounds all working together was great,” said Williams.  “They are helping others through horses and this speaks volumes about the human and equine connection. All I can say is WOW.”  The riders who are part of Team Step by Step are from around the United States, South America, Central America, and Europe. They not only support the international non-profit by raising awareness but also donate time and winnings in the show ring.

**The Speaking of Horses special Step by Step episode will premiere June 15, 2013 on Pegasus TV and Horse Talk TV and will repeat online at www.speakingofhorses.com.