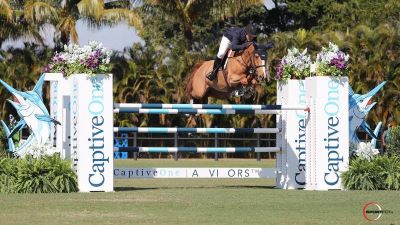 January 23, 2021 – Wellington, FL – It was an action-packed afternoon on the Derby Field at Equestrian Village at Palm Beach International Equestrian Center, with McLain Ward (USA) and Contagious climbing to the top of the leaderboard in the $37,000 CaptiveOne Advisors 1.50m Classic CSI3* on Saturday, January 23.

Hunter riders entered the E. R. Mische Grand Hunter Ring on Saturday to compete for the tricolor ribbon in the Amateur-Owner Hunter 3’3” 36 and Over division. After two days of competition, Becky Gochman and Gochman Sport Horses LLC’s Mythical received first, second, and fifth place ribbons to earn the championship title.

Gochman, of Wellington, FL, and Mythical have been partnered for several years and are no strangers to the winner’s circle. Mythical is considered an important member of the Gochman family, having also been ridden by both Mimi and Sophie Gochman.