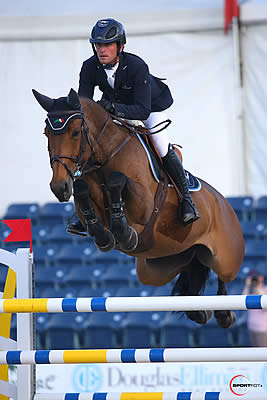 Canadian course designer Michel Vaillancourt built a track for 45 starters with 12 advancing to the tie-breaking jump-off. Returning near the end of the jump-off round, Kenny and Scarlett du Sart Z, owned by Vlock Show Stables LLC, broke the timers in 33.54 seconds to claim the lead and bump Israel’s Sydney Shulman into the runner-up position. Shulman and J-Boston S.E, a horse she owns together with her mother Jill, posted a time of 33.96 seconds.

“I’ve been very lucky – I had a good winter and all the horses went very well,” said Kenny of his season at WEF. “I had a great feeling coming into this winter because I have an incredible group of horses, and I’m very lucky that I have those horses.”

Kenny got the ride on Scarlett du Sart Z, a 10-year-old Zangersheide mare (Stakkato de hann x First Bride), during the horse’s seven-year-old year. He has high hopes for the mare’s future, saying, “This is a mare that Teddy Vlock and his owner bought for me, and we’ve been slowly producing her. She’s really starting to turn a corner, and I think she’s an incredibly talented horse that will end up jumping at the highest level.”

Equitation riders took on Ring 6 on Saturday morning to compete for the blue ribbon in the THIS Children’s Medal 14 and Under class. Due to the large number of entries, the medal was held in a California Split format with Sofia Maskowitz and Samantha Takacs riding to the top of the class. Maskowitz rode Quantum Chanel to a first-round high score of 84 and remained in the lead during the test. Takacs and her mount Cooper moved up one spot during the test, after a first-round score of 82.

Maskowitz, of Freehold, NH, has been partnered with her equitation mount, Quantum Chanel, for only a couple months. The pair, trained by Laura Bowery, stayed on top of the class through the first round of 44 entries and the test. Maskowitz described that she is still working on figuring out the 12-year-old Hanoverian gelding by Quality, so she was extremely pleased with her first round.

Takacs, of Oldwick, NJ, and her horse Cooper also put in two consistent rounds in the medal to earn the blue ribbon in their section. The duo has been working together since last spring, with the help of New Hope, LLC as well as Findlay’s Ridge, LLC. Takacs loves the eight-year-old KWPN gelding’s big stride and sweet personality.