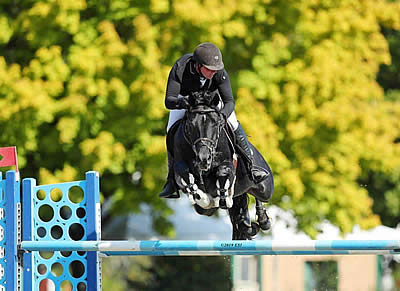 June 18, 2020 — Inspired by the legendary story of Harry DeLeyer and Snowman, which was made into Elizabeth Letts’ popular book, The Eighty-Dollar Champion: Snowman, the Horse That Inspired a Nation, Andy Kocher is bringing show jumping’s greatest investment tale to life in modern day.

In the 1950s, DeLeyer purchased Snowman for just $80, when the horse was bound for slaughter. The pair would go on to become legends of the sport, eventually being inducted into the United States Show Jumping Hall of Fame in 1992. Understanding how expensive sport horses are in the industry, Kocher wants to give a lucky equestrian an opportunity to have a future star of his or her own for just $80.

Through a very unique contest, Pippa, a 2020 filly by Damokles out of Belaquador, by Equador, will be awarded to a participant of the Eighty-Dollar Champion Contest. Entry into the contest costs just $80. On July 13, 2020, an entry will be drawn to determine the winner of the contest.

“I grew up idolizing the story of Harry DeLeyer and Snowman,” Kocher said. “I’ve wanted to do something like this for quite some time. I hope this contest can give someone a great opportunity that they might not otherwise have.”

Pippa is by Damokles, who has recorded placings at the five-star level. In 2018, the stallion jumped the Longines FEI Jumping World Cup™ New York at the American Gold Cup within two months of debuting at the international level. In 2020, Damokles won the National Western Grand Prix in Colorado. He is by Ukato, one of the most talented and successful sons of the great Stakkato. His dam is the KWPN mare Orindy, a productive broodmare who has produced no less than three internationally competing offspring, all by Ukato. Second dam Dorinda (Tangelo XX) produced another 1.60m performer, Justin, by Emilion.

Pippa’s dam, Belaquador, was campaigned by Meagan Nusz, who herself grew up going to local shows at Harry DeLeyer’s son John DeLeyer’s farm. Belaquador is now a member of Kocher’s broodmare band at Windwood Equestrian in Pelham, AL. She is by Equador, a son of the legendary stallion Voltaire, out of Elansa, who has produced the 1.60m performers Melansa (Edwig) and Q’s Charm (Burggraaf) as well as the 1.50m performer Delansa (Equador) and Teun (Lux Z), who competed at 1.45m. Second dam Wulensa (Gag XX) produced the 1.50m-performing Landvoogd (Burggraaf). Belaquador’s sister Jelansa also produced the highly successful 1.60m performer Vesuvius, who with Nusz in the irons, was a venerable five-star performer, recording wins and placings at top events around the globe.

Kocher has partnered with William Upton’s Windwood Equestrian for the Eighty Dollar Champion Contest. Based out of Pelham, AL just 28 miles from the Birmingham airport, Windwood Equestrian has built up a state-of-the-art equestrian facility and is home to an accomplished sport horse breeding program, where Damokles stands at stud. The beautiful property has also become a popular event venue, regularly hosting weddings. In July 2020, Windwood Equestrian will present the young prospects, ages 5 and under, for the second Andy Kocher Sport Horse Auction, which will run at Auction.AndyKocher.com, July 22-25.

In order to submit a complete entry, participants must also complete a participant application. Kocher will review the applications and contact references, including a veterinary reference, to make sure that the winner is able to provide a suitable home for a horse. Participants may purchase multiple tickets to increase their chances.

The Eighty-Dollar Champion Contest will benefit the Snowman Rescue Fund, which supports Omega Horse Rescue & Rehabilitation Center. Omega gives other slaughter bound horses the same chance that Snowman had to become a part of a loving family, placing more 1,200 horses since its founding in 1997. Omega also rescues slaughter bound horses from the New Holland Auction, the same auction where Harry deLeyer rescued Snowman in 1956. Omega saves, rehabilitates, re-trains and prepares horses for adoption into new homes.

For more information or to enter the Eighty-Dollar Champion Contest, click here. 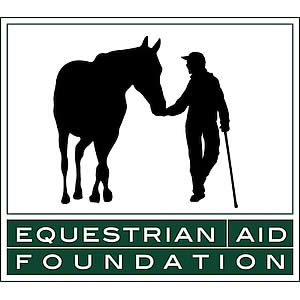 Wellington, FL. January 5, 2015 – As equestrians from around the world head to Wellington, Florida for the winter, the Equestrian Aid Foundation is offering an exclusive screening of award winning documentary, Harry and Snowman.

The Harry and Snowman advance movie screening will take place on Sunday, February 21st at the Global Dressage Stadium at 13500 South Shore Blvd. The Luminary Award, which yearly is bestowed upon an individual who is committed to the betterment of horse sports and the people within the community, will be presented to Harry de Leyer.

The money raised will go to support EAF’s mission to help equestrian professionals in their time of need. Guests will enjoy a variety of picnic style food trucks, popcorn, ice cream and cocktails while experiencing Harry de Leyer’s Cinderella story.

Harry and Snowman is a feature length documentary about international show jumping rider Harry de Leyer and his horse Snowman. Snowman was an old Amish plow horse that Harry rescued off a truck bound for a meat and glue factory. In less than two years after his rescue, the man and his horse were the national show jumping champions and had become national celebrities.

“We are excited to be hosting a fun, family friendly evening that we hope will bring together people from both the community and the equestrian world,” said President of the Equestrian Aid Foundation, Stephanie Riggio Bulger. “EAF would love to share with all of Wellington this remarkable story that has been able to touch the hearts of a nation.”

In additional to General Admission, VIP tickets and tables will be available for purchase to all attendees. For more information or to order tickets, please visit https://harryandsnowman.eventbrite.com.

About the Equestrian Aid Foundation: For 19 years, the EAF has delivered financial assistance to equestrians, horsemen and equine-related professionals who are suffering from catastrophic illnesses or injuries throughout their time of need. In September 2012, the EAF reached a milestone of distributing more than $2 million in funding to its recipients throughout its history. Funding for medical, rehabilitation and essential expenses – such as food and housing – enables recipients to cope through crisis and get back on their feet. The EAF is dedicated to helping people from all riding disciplines, equine professions, backgrounds and ages. The EAF is a 501 (c) 3 organization. Learn more at www.equestrianaidfoundation.org, www.facebook.com/EAF.Ride4Hope or @ride4hope. 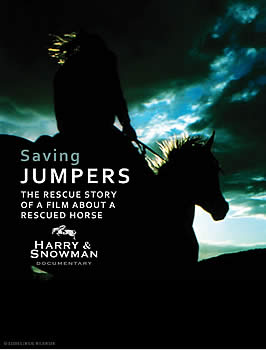 With the attention of the global horse-world focused in Wellington, Florida’s Winter Equestrian Festival, Wellington’s own Karin Reid Offield (Offield Farms) has taken the lead to fund a film depicting an amazing real-life story, of the most famous horse ever “rescued.”

Literally pulled off the slaughter truck for $80 by renowned Equestrian Harry DeLeyer, Snowman went on to become a three-time National Champion earning his place into the Show Jumping Hall of Fame.

Karin’s “Saving JUMPERS” is an untold story behind the story. It includes rescuing over 7 miles of lost film footage – ultimately providing some of the historic images in the new film, “Harry & Snowman.”

We believe that you will be:
* motivated to read, fan, promote and share this story;
* intrigued to hear about the 35 years that went into making this film;
* touched to feel the heartwarming tale of one man’s love for his horse, and may ultimately be
* inspired to experience what it’s like to rescue an animal for themselves; and
* FIRED UP to share the story with their “followers” and “friends.”

INSTRUCTIONS to use BOX app:

To learn more about the upcoming documentary feature film: