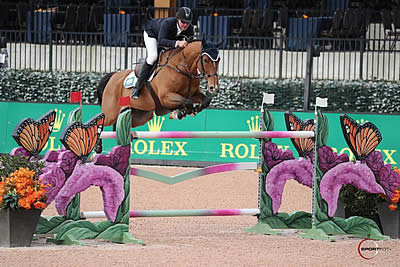 With 38 entries and nine jump-off pairs, Scott Keach emerged on top. “My horse was great today. It was one of those days where everything goes smoothly and everything comes out well. In the jump-off, I was trying to cut the turns, keep him moving, and hopefully be quicker than the others.”

Concerning his mount, who made easy work of the technical course, Keach remarked, “He feels super. He likes the cold weather; it suits him. He’s had a couple of pretty easy weeks, so he’s fresh. Hopefully he’ll be really fresh Saturday night!”

Keach plans to ride in the $132,000 Greenville-Spartanburg International Airport Grand Prix CSI 3* with Fedor, and elaborated on his future plans. “He goes out for a holiday next and then comes back in to do some CSI 5* shows.”

“I went first on Liroy 30, which was nice because he’s a little more experienced, so I got to see the track,” Land explained. “I was trying a new bridle today and he was very happy with it. He was really fast and listened great. I just did my plan and both of the horses were so good today. Liroy 30 is really, really sweet, but he is a little bit nervous and Falco V is like the brave bear going into battle. Even though he is younger, he’s braver and more outgoing. Liroy 30 is the sweet, shy one.”

Land continued, “With these two horses, I’m just continuing to try to move up. I don’t have an older horse right now, so these are my top two guys and we’re just trying to move up. The CSI 3* level is about where we are at and we’ll just continue to move forward and jump CSI 4* and CSI 5* competitions next year.”

Of the venue, where Land frequents during the year, she said, “I love the venue. It’s beautiful. I love all the different rings. I really like the atmosphere here and it’s wonderful that there are big crowds. It always feels like an exciting show.” 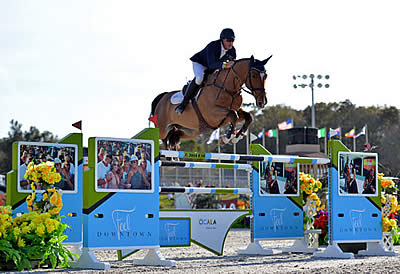 OCALA, FL (February 23, 2016): The final day of FEI competition at HITS Post Time Farm in Ocala, Florida came to an exciting close Sunday with a jump-off battle in the $100,000 FEI City of Ocala Grand Prix. Scott Keach (AUS) and Fedor, co-owned with Southern Cross Equestrian, LLC, prevailed as the sun set on the Ocala Horse Properties Stadium to take home the top spot and a $33,000 prize check.

Fifty-one decorated riders, including the likes of McLain Ward, Ian Millar, and Beezie Madden, tested the course of 13 jumping efforts set at 1.60m by Alan Wade of Ireland, but only nine would prove that they have what it takes to advance to the jump-off round.

Paulo Sergio Mateo Santana (ESA) and Taloubet, co-owned with Filho, were first in the jump-off order and ready to get down to business. The same mid-course combination that had caused trouble for many in the first round got the best of them resulting in four faults. Santana continued without hesitation but another at the final fence would cost them 8 total faults in a time of 43.38.

Second in the order was Luke Dee (AUS) aboard about Auckland de l’Enclos, owned by Ashland Stables. After a tight turn to the second fence, Dee made his way towards the combination but an unfortunate rail resulted in four faults, and a time of 46.36.

Hot off their $5,000 FEI Welcome Stake win earlier in the week at HITS Ocala, Marilyn Little (USA) and Corona, owned by Raylyn Farms, Inc., were next in line and hoping to give onlookers a clean trip. Little’s grey mount gave it her all as she cleared every fence in her way, crossing the timers in 44.87 to move straight to the top of the leaderboard.

Little, a Pan American Games Gold Medalist in Three Day Eventing, gave credit for the day’s success to Corona, saying, “She’s got incredible scope, she’s incredibly careful and she’s got an incredible heart so I really couldn’t ask for much more from a horse. She loves the game – she goes in there and gives you everything. You can count on her every time.”

Next in the order was Brandie Holloway (USA) riding Lucky Strike, owned by Hays Investment Corp. Although they were off to a careful start, three rails down during the trip would result in 12 faults in a time of 45.49. Keach was waiting in the wings, ready to make his home country of Australia proud with a memorable round for the books.

The crowd went silent waiting to see if Keach could one-up Little as he navigated Fedor through the course with no disturbed rails in his path. Speeding through the timers, in a fault-free 43.71 seconds, Keach soon found his name at the top of the scoreboard.

Christine McCrea (USA) and Win for Life, owned by Candy Tribble, followed Keach in the jump-off order, and after a majestic first round, she was hoping for a similar outcome in the second. With a swift, clear round, McCrea was close, but her time of 47.59 placed her just behind Little.

The seventh trip of the jump-off belonged to Cara Raether (USA) and Lyonell, owned by Trelawny Farm LLC. After a clear first jump, Raether found trouble with the second fence of the combination, totaling 3 down rails, 12 total faults as they crossed the marker in 51.42.

Federico Fernandez (MEX) and Guru, co-owned with Paola Amilibia, rode into the ring for the second to last trip of the day, and they kept spectators on their feet until the very last jump. Careful in his craft, Fernandez moved with accuracy over every jump and raced through the timers for the third clear of the jump-off in 43.95, to place just behind Keach.

The last trip was legendary anchor rider Beezie Madden (USA) who, just days prior, helped the U.S. Team to a win in the Furusiyya FEI Nations Cup CSIO4*, presented by Edge Brewing Barcelona. In perfect harmony with Abigail Wexner’s Vanilla, they made their way through the course, but again, a rail at the challenging second fence of the combination would seal their fate. With four faults and a time of 43.29, Madden moved into fifth place, leaving Keach in first, Fernandez in second, Little in third and McCrea in fourth.

“I’m very happy with how the horse jumped. I couldn’t have expected any more. In the last six months he has really improved, stepped up and really started to jump some clean rounds. I’m very happy,” said Keach, who has become more serious about show jumping in the past four years after a successful career in Three Day Eventing. “The courses all week have been fantastic, but everyone knows Alan Wade is a very good course builder.”

Delighted with the day’s events, Fernandez added, “I’m thrilled to be here. It has been a fantastic week and I’ve enjoyed it enormously. Today’s course jumped incredibly and the conditions were perfect. The course designer [Alan Wade] was brilliant throughout the entire weekend.”