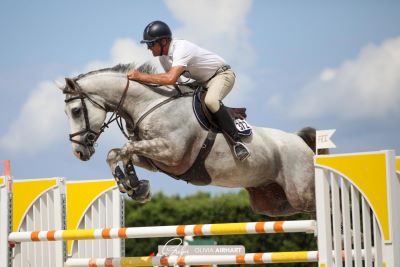 Tampa, Fla. – Sep. 3, 2021 – Hunter and jumper competition returned for the second day of the 2021 Southeast Medal Finals at the Bob Thomas Equestrian Center in Tampa Florida on Friday, September 3. Following a successful kick-off day on Thursday, competitors were eager to get back in the rings and claim top honors in their respective classes. In the Grand Prix Arena, thirty riders battled it out in hopes of winning the lion’s share of the $7,500 purse in the Welcome Stakes presented by Up Country. Derek Petersen and Zechariah 3:9 prevailed over a competitive field of 28 entries. A deep field of experienced hunter riders took to the Teco Indoor Arena for the feature hunter class of the day, the $3,000 3’0” Hunter Spectacular presented by CWD Sellier. Schuyler Dayner and Bertram Winkle brought their A-game topping the leaderboard.

The $7,500 Welcome Stakes track featured a 12-obstacle, 1.25m track that challenged all of the horse and rider combinations to advance to an immediate jump-off. Riders that advanced to the shortened 7-obstacle track were immediately challenged on course by first, heading to a towering triple bar set as fence one. In honor of Southeast Medal Finals’ 5th anniversary, there was an extra $2,500 in prize money up for grabs, prompting riders to give the shortened track their speediest effort. Petersen and his own 7-year-old Dutch Warmblood gelding entered the ring as the second to last horse and rider combo in the class. The current leader, Jenni McAllister, had held the top position for a majority of the class, with a time that seemed almost unbeatable. Petersen, who just recently partnered with his young mount in April, did not have plans to steal the show, but his quick and clean jump-off proved to be just the trick to move him ahead of McAllister. His time of 33.215 was fast enough to hold off the final athlete in the class.

Friday’s win in the $7,500 Welcome Stakes proved to be a very special occasion for Petersen, who is not only celebrating his first win with Zechariah 3:9, but also competing in his first show back after two months out of the competition ring. Petersen, who contracted COVID-19 in April, just recently climbed back in the saddle after a serious hospitalization with the virus that also sadly claimed the life of his late wife.

Jenni McAllister and her first of two mounts in the class, Legis Touch the Sun, a 15-year-old Holsteiner gelding owned by Legisequine.com, held a strong lead throughout a majority of the class but were bested by Petersen at the bottom of the order, while Madison Kondracki and her own 13-year-old Oldenburg gelding, Shutterfly, rounded out the top three.

Hunter competitors, with their expertly turned-out mounts, were the final field of competitors to take to one of the five rings on Friday evening for the $3,000 3’0” Hunter Spectacular presented by CWD Sellier. 19 horse-and-rider combinations made their way around the course in hopes of catching the judges’ eyes. Set in the hunt-and-go format, every combination was given the opportunity to ride a shortened version of a traditional Hunter Derby, with one portion of the round in the classic over fences style and the other half as a handy portion. Out of the combined field of amateurs, professionals, and juniors, it was young rider Schuyler Dayner who dazzled at the last minute with dual scores of 87.00, to take over the first place position with her own 11-year-old Warmblood gelding Bertram Winkle.

With Bertram Winkle as her second ride in the class, Dayner had the advantage of riding the course once before aboard Carlos He’Las. With the opportunity to improve upon her first trip scores, Dayner still did not expect to rocket to the lead in a class whose field was made up primarily of professional hunter riders. Though the young Florida native was unsure of her ability to best the pack of professionals, she is a frequent competitor in National Hunter Derbys, most recently taking home a second-place finish in the $2,500 USHJA National Hunter Derby at Plain Brown Wrapper. Dayner hopes to qualify for the International Derby Finals next year with Bertram Winkle.

Isaac Leffkowitz and Stacey Reser’s young rising star, Diaronimo, held the lead all the way from the top of the order until Dayner laid down her double 87s. At just 6 years old, the Holsteiner gelding and the young professional settled into an honorable second place. Patrick Miller and Morgan Goodman’s 9-year-old Danish Warmblood gelding, Larrico, completed the podium in third place.

Hunter competition was also featured in the Gene Mische Ring with the $500 Pony Handy Hunter Classic and $1,000 2’6” Hunter Spectacular, both presented by CWD Sellier. Competitive young riders and their ponies created stiff competition, and in the end, it was Evana Somareddy and Lafayette Park who came out on top. In the $1,000 2’6” Hunter Spectacular, Braeden Simons and San Quinta SN claimed the first place prize.