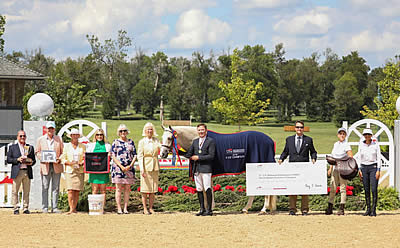 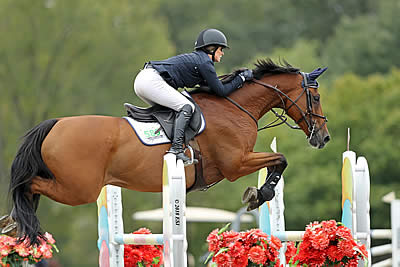 The HITS Culpeper Summer Series at HITS Commonwealth Park has come and gone for 2018. It was a beautiful week to close out the season in the Heart of Virginia’s Horse Country with great weather, blue ribbons and the Horseware Ireland Grand Circuit Champion awards claimed at the Culpeper Finals.

The featured classes in the Grand Prix Ring kicked off with the $5,000 Open Welcome where Tracy Magness would start her week with a win aboard INTENZ VAN HD. Magness and “Candy” crossed the timers in 35.043, over a full second faster than the second place recipient.

Magness’ victory put an exclamation mark on her season at HITS Culpeper, marking her eighth blue ribbon in a featured Open Jumper class, and securing the Horseware Ireland Grand Circuit Championship in the Open 1.40m Jumpers. Jumping to second place would be Jennifer Brennan aboard MAC, finishing in a four-fault time of 34.024. Third place would be awarded to Cian McDermott, taking the reins aboard NEWCASTLE in a four-fault time of 35.565. Danny Mahon would take home the fourth place award aboard CHOPPER 5, followed by Randy Johnson in fifth aboard his own CAMPARO.

A field of 21 would take to the course Friday afternoon in the $10,000 Johnson Horse Transportation Prix. Top honors would be awarded to Marylisa Leffler aboard LUMINOUS, soaring to the finish in 31.147. Second place would be awarded to Magness and INTENZ VAN HD in a time of 31.276, followed by Johnson and JADE VAN DE START with a time of 32.872 to claim the yellow ribbon. Jason Berry would capture the fourth place ribbon aboard QUANTOS in a time of 33.598. Rounding out the top five in the Prix would be Tamara Morse and RAVENNA ADELHEID Z in a time of 34.135.

The excitement of the featured jumper classes at the HITS Culpeper Finals would continue on Sunday with the $20,000 HITS Open Prix. Taking home top honors, by over a full four seconds, would be Brooke Kemper and CLASSIFIED. Soaring through the timers in a fault-free time of 34.442 would secure the win in the final Open Prix of the HITS Culpeper Summer Series. Riding home with the second place ribbon would be Ashley Foster and DALIANTE M in a time of 39.612. Marylisa Leffler and LUMINOUS would take home the third place ribbon for their jump-off rider, finishing with a four-fault time of 38.340. Taking home the fourth place ribbon would be Magness and INTENZ VAN HD, followed by Laura Gaither and GARDA in fifth.

Junior and Amateur riders took the stage next for the $1,000 Platinum Performance Hunter Prix. Taking home top honors would be Carley Gray aboard her own UNIQUE CAR. Chelsea Director and her own URBAN would follow to be awarded the second place ribbon.

The Constitution Classic also featured the Culpeper Equitation Classic where Junior and Amateur riders have the option to compete at either the 3′ or 3’6″ fence height.

Taking home top honors was Madison Smyth whose trip was described by the judge as “smooth as silk.” As first to go in the class, she put the pressure on the following riders. In second place was Jacqui Needle, followed by Lauren Miller to take home third place.