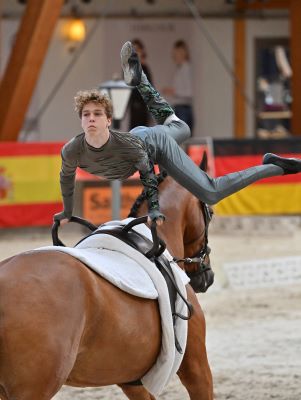 FEI Vaulting returned in great fashion over the weekend, as Boulerie Jump in Le Mans, France hosted the biennial FEI Vaulting World Championships for Juniors 2021.  An arena that has housed many momentous Vaulting moments once again provided the stage for Vaulting history, with Sam Dos Santos winning gold in the individual male competition, securing a first ever medal in Vaulting for The Netherlands.

Fifty-six competitors lined up at the start of the week in the female category showing an unprecedented standard. Coming into the final round it looked to be a two-way tussle between defending champion Mona Pavetic (GER) and Austria’s Anna Weidenauer.  Weidenauer, leader after the first round, lost some of her 0.12 advantage to Pavetic in second round compulsories, resulting in a nail-biting finish.

Hailing from URC Wildegg, which has previously produced multiple female champions, Anna Weidenauer held her nerve to add her name to the history books. Alongside lunger Maria Lehrmann and Chivas 14, she took the top step of the podium on a combined score of 7.974, narrowly taking the title from the 2019 champion Mona Pavetic (7.931), with bronze going to Germany’s Gianna Ronca (7.820).

History was made in the individual male category as 15-year-old Sam Dos Santos lead throughout all four rounds of the competition to secure the first ever medal for The Netherlands in Vaulting. Together with his lunger Rian Pierik and horse Chameur, his dynamic, expressive freestyle impressed both judges and audiences alike.  The Dutch trailblazer finished on a combined score of 8.360 marking a historic moment for Vaulting in The Netherlands.

In the pas-de-deux category Arne Heers and Lily Warren were in a league of their own.  Together with their horse Capitano 59 and lunger Sven Henze, they scored a spectacular 8.732 in the final round to finish on a combined total of 8.578, an impressive 0.5 ahead of their nearest competitors.

Anna Weidenauer secured her second medal of the day as she partnered with Paul Ruttkovsky to take the second step on the podium (8.083).  Whilst having only secured their first ever Vaulting medal mere hours earlier, Sam Dos Santos & Elise Van De Ven took The Netherland’s medal tally to two, taking bronze (8.037).

In the squad competition Germany triumphed taking top honours on a score of 7.805.  With Michelle Arcori on the lunge and horse Elias 75, the highly decorated team from Ingelsberg fought off tough competition from the field who were all vying for the much sought-after squad title.  It was a fight to the end with the United States of America taking silver (7.669) and Switzerland bronze (7.655).

This week marked Vaulting’s triumphant return on the world stage, with the emergence of new stars and another nation staking a claim on the medals; for National Coach of the Netherlands Claire De Ridder, the momentous achievements of Sam Dos Santos, Elise Van De Ven, and the depth of talent they have coming through, she hopes can inspire the next generation.

“It is really incredible; we knew before he (Dos Santos) came here how talented he was, but he didn’t have competition experience.

“I hope from the achievements here this weekend that the sport will evolve more in The Netherlands. I hope it inspires younger Vaulters and shows them that it is possible to win medals and have these successes.  I am excited for the future; we have so much talent coming through.

“To see everyone here, united, it really brings people together and that is what Vaulting is all about.”