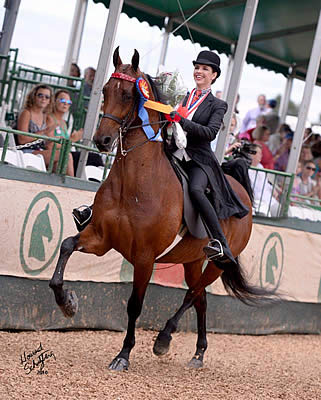 When asked how it felt to be the Gold medal winner, Upton said through tears, “It’s surreal. I’m 27 years old, a poor trainer’s kid. I never had a nice horse when I was a kid. You always have to have a nice horse as a kid and I could never compete with everybody else. At 27, to finally be able to do it is so cool.”

Upton was confident in her test, but didn’t expect to be the unanimous winner.

“I felt pretty good. With 19 in there, I felt like every pass counted,” Upton said. “I felt the rail work was ribbon-worthy, but I didn’t know everyone else kind of had tough patterns. After my pattern I thought I had earned a ribbon, but I wasn’t sure because I had a couple things I could have done better.”

The talented group of riders from across the country performed on the rail, and completed an individual pattern created by the judging panel of Rodney Hicks, Raymond Krussell, and Donna Pettry-Smith.

The Reserve Champion and Silver medalist in the Final was Kristen Dull (Apple Valley, Minn.) riding In Your Sights. The Bronze medal was presented to Cecelia Hoffmann (Bolingbrook, Ill.) riding Kamunyak.