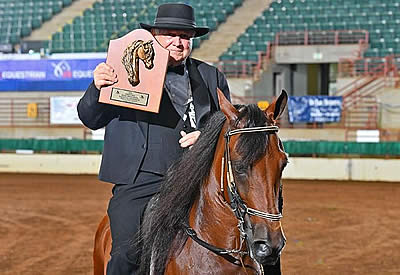 Dick Miller, the Paso Fino Horse Association’s newest Hall of Fame inductee, was first introduced to the Paso Fino breed in the 1980s when he saw a sign on Interstate 80 in Nebraska advertising the “SMOOTHEST RIDING HORSE IN THE WORLD.” Nearly 40 years later, Miller (Fort Myers, Fla.) is not only still riding, but is also competing at top horse shows around the country, thanks to these unique horses and the tight-knit community of people who love them.

Though he grew up riding working ranch horses, Quarter Horses, Missouri Fox Trotters, and off-the-track Standardbreds, Miller was hooked on the spirit and smooth, lateral gait of the Paso Fino breed almost immediately. He visited the farm advertised on the highway sign and purchased the very horse he rode that day, Merodeador El Prim.

“I just bought the horse. I don’t really know why; I just bought him,” said Miller. “I was impressed by Merodeador’s personality, plus he had done well in a recent national show. So I bought him and rode him in as many classes as possible. The only thing this horse couldn’t do was jump!”

Miller credits the Paso Fino’s natural lateral, four-beat gait with his ability to still compete and ride. “Riding is not as hard on the body with the Paso Fino because you don’t have to post. The gaits are super-smooth. I have had a bad back since I was about 25 years old because of some injuries I got playing football as a kid. So not having to post is hugely helpful in my ability to keep riding,” said Miller. “They’re a smaller horse, too, which makes getting on and off easier as you get older. But don’t let their size fool you — they are little powerhouses.”

A few years, after purchasing Merodeador El Prim, Miller added another black gelding to his herd, Artillero Arroyo Maraca. The Paso Fino is described as having brío, the Spanish term referring to the horse’s spirited personality, and Artillero had it in spades.

“He was a horse of a lifetime,” Miller said of Artillero, a Paso Fino Hall of Fame horse. “You learn pretty fast what you like and what you don’t like. It all depends on the rider’s personality. For me, I like a show horse with a big personality. My horses are not great trail horses like many Pasos are, but that spirit is what I like in a horse, even today as an 80-year-old man. The breed can be intimidating to someone at first, but feeling that energy and power is incredible as a rider.”

Miller began competing in local shows, building up to some of the most prestigious Paso Fino shows in the world. He has owned more than 130 Paso Finos, competed in more than 3,000 classes, and won more than 85 national titles. He competed in the Mundial World Championships four times and showed all over the U.S., England, Germany, Puerto Rico, and the Dominican Republic.

This year, Miller rode three horses and competed in eight classes at the PFHA Grand National Championship Show. He won one championship and two reserve championships. He and his wife, Sandy, own Mid-Iowa Paso Fino, a training and breeding facility, with Jorge Suarez and Ramon Cintron as their trainers.

“It’s amazing what this breed has given me. I didn’t even know about disciplines growing up; we just rode. Never went to a horse show. Now I’m telling stories about being in Germany for a Paso Fino competition and how I competed in international competitions like the Mundial,” said Miller.

After four decades of being in the Paso Fino industry, Miller is grateful for the relationships he has developed within this community. He has consistently given back through service on the PFHA Board of Directors, the Paso Fino Horse Foundation, and sponsorship and other support for the U.S. teams competing in the Youth Mundial over the years.

“I am grateful to have had the opportunity to ride so many talented Paso Fino horses and to cultivate friendships that will last a lifetime,” said Miller. “It was a steep learning curve when I started with these horses in the 1980s, but people were so supportive and helped me along the way. Every day that I ride and every show that I participate in is a testament to the incredible enjoyment this breed gives us!”