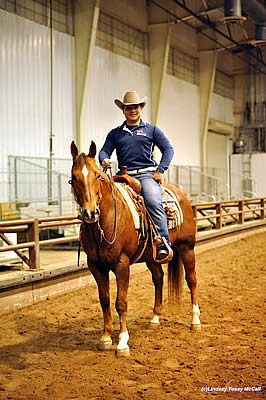 Para Reining made its debut during the 2013 AQHA World Championship Show, and interest in the sport continues to grow, including a class at the 2014 World Show, a class at the Kentucky Reining Cup and the one at the NRHA Futurity.

For 2014, AQHA adopted para-reining rules in collaboration with USA Reining and NRHA. Those rules will be revised with the goal of making para-reining a nationally recognized sport in the future. 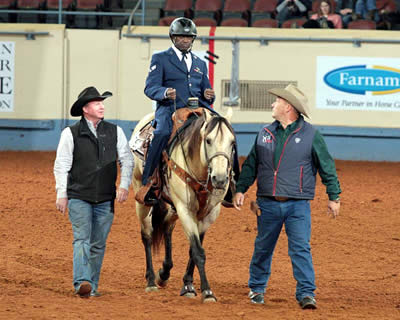 Along with a standing ovation from the crowd of reining enthusiasts in Oklahoma City, U.S. Air Force veteran Derrick Perkins received the high score of the night, a 74, from international judge Joe Carter.

Perkins was injured in 1988 while on active duty and the crowd was on its feet to honor both his service and his riding.

For the demonstration at the World Show, the para-reiners were matched with top-notch professionals who coached them on their rides and helped mount them on American Quarter Horses donated for the day.

Perkins’ coaches were reining’s double-gold medalist and the National Reining Horse Association’s only $5 million rider, Shawn Flarida of Springfield, Ohio, and AQHA Professional Horseman J. D. Yates of Pueblo, Colorado, one of the best ropers in the world.

Perkins’ horse was Mr Fritz Wood, a 2008 buckskin stallion by Mr Junewood and out of Fritz Lovelady by China Fritz. He was bred by 20-year breeders Sam Shoultz and Ken Matzner of Fort Collins, Colorado, and was donated by his owner, Lincoln Figueiredo of Brazil, who was world champion in amateur heeling and amateur tie-down roping at the World Show. Figueiredo and the stallion were also reserve champions in the AQHA Farnam All-Around Amateur standings.

Shoemaker was coached by Josh Visser of Visser Reining Horses in Whitesboro, Texas, and she rode See Stevies Dream, a 2011 gelding by Magnum Chic Dream and out of Kalico Whiz by Topsail Whiz. He was bred by Lyle, Sondra and Josh Visser of Whitesboro and is owned by Visser’s wife, Carri.

Frederick Win rode Shiners Little Spark, a 2008 palomino gelding by Shining Spark and out of Smart Little Betty by Smart Little Lena. He was bred by Blair Visser of Agassiz, British Columbia, and was donated by his owner, Christina Riley of Battle Ground, Washington.

Win started learning dressage in 2011 and successfully competed at the United States Dressage Federation national level and FEI international level shows. Win competed at the Kentucky Reining Cup and at the World Show in 2013. He is coached by reining trainer Josh Visser, who also serves on the NRHA executive committee and was the 2013 NRHA professional horseman of the year.

Elinor Switzer traveled from Europe to participate in the para-reining demonstration at the World Show. Switzer is a founding member and past chairwoman of the Para-Western Riders of Germany and has an extensive show record in AQHA Equestrians with Disabilities classes. Switzer is a para-equestrian FEI Grade 4 rider.

AQHA Professional Horseman Shane Brown, a winning freestyle reiner from Elbert, Colorado, coached Switzer through her ride on Little Dual Dunnit, a 2001 bay gelding by Hollywood Dun It and out of Little Dual Missie by Dual Pep. He was bred by Tim and Colleen McQuay of Tioga, Texas, and is owned by Marc Jenkins of Colorado Springs, who generously donated him for the demonstration.

Paralympian Rebecca Hart was among the riders who competed at the World Show in 2013 and returned for more in 2014. She represented the United States in para-dressage at the 2014 Alltech FEI World Equestrian Games in Normandy. Her coach was Martin Muehlstaetter, a respected reining trainer and a member of Team Austria at the 2014 World Equestrian Games. Hart rode Spookanne, a homebred mare donated by Rosanne Sternberg of Sterling Ranch. Spookanne is a 2006 mare by Smart Spook and out of Annieote Freckles by Colonel Freckles.

Holly Jacobson of Ipswich, Massachusetts grew up in Connecticut riding hunters. Jacobson has been pursuing para-dressage the last four years and now para-reining. For the second time, Jacobson rode Zins Smart Wrangler, a 2011 gelding donated by Reed Kyle of Whitesboro, Texas. Jacobson was third on “Wrangler” at the para-reining event during the Kentucky Reining Cup in April. Jacobson’s coach for the day was Fred Thomsson, a champion reining trainer who represented Sweden at the 2010 World Equestrian Games in Kentucky and the 2014 World Equestrian Games in Normandy.

Para-reining made its debut during the 2013 AQHA World Championship Show, and interest in the sport continues to grow. For 2014, AQHA adopted para-reining rules in collaboration with USA Reining and NRHA. Those rules will be revised after this test year and with the cooperation of the United States Para-Equestrian Association with the goal of making para-reining a nationally recognized sport in 2015.

By: Larri Jo Starkey for The American Quarter Horse Journal