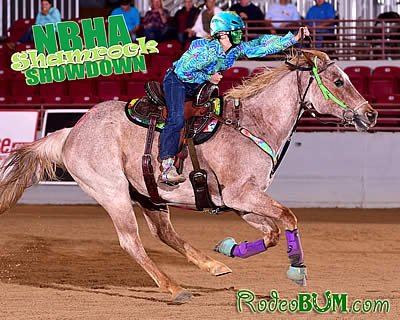 Competitors traveled from as far as Canada, Vermont, Tennessee and North Carolina. Racers from nearby South Carolina, Georgia and across Florida are familiar with the Jacksonville Equestrian Center and never miss an opportunity to run for big cash prizes inside the state-of-the-art coliseum.

“The facility is great,” said Renee Jenkins. “We were the second show to ever be held at the Jacksonville Equestrian Center and we haven’t missed a year yet.”

The Jacksonville Equestrian Center was excited to host the group for its fourth consecutive year. A total of 853 entries dashed down the alleyway over the course of the three-day event. In addition to cash prizes riders had an opportunity to win tack and one of 60 wildcards. The wildcards give the first, second and third place finishers in each division a guaranteed slot to compete at the NBHA World Championship Show held each October.

The next scheduled event is the Florida Reining Horse Association Spring Show March 23-25. The multi-day reining competition features a full slate of classes from short stirrup and youth to amateur, non-pro, novice, green and open. The second annual Spring Classic Hunter/Jumper show is set to start on April 4 and upcoming events in May include dressage and team roping. 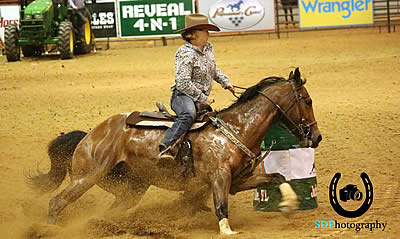 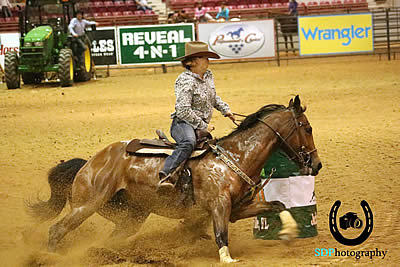 Jacksonville, FL (March 24, 2016) – Riders of all nationalities were feeling a bit of Irish luck as they headed to the Jacksonville Equestrian Center this past weekend to vie for an equestrian’s version of a pot of gold at the National Barrel Horse Association (NBHA)’s Shamrock Showdown.

The annual competition invited riders to compete in senior and junior barrel racing exhibitions for their share of the prize money. The Jacksonville Equestrian Center, an 80-acre multifaceted facility in Jacksonville, Florida, was excited to once again host the event in its enormous indoor stadium.

The fun-filled Shamrock Showdown proved a great opportunity for a family outing as it offered free parking and admission to spectators. With several hundred talented horse and rider pairs competing each day of the competition and rows of barrel racers’ favorite merchandise in the vendor areas, the event was a must for equestrians.

Known for its laid-back and yet exciting atmosphere, many spectators and riders alike find themselves celebrating St. Patrick’s Day at the Shamrock Showdown year after year.

Ivy Grieb, from Green Coves Springs, Florida, is one of those people. Grieb has been coming to the show for the past seven years.

“The arena and the facilities at the Jacksonville Equestrian Center are amazing,” she said. “The practice arena is nice and the atmosphere around here is great.” To Grieb, years of competing at the Shamrock Showdown could never get old. “I just love barrel racing!”

Edie Neal, from Webster, Florida, on the other hand, brought her horse Gizmo to the show for the first time this year, and had an equally positive experience. This was four-year-old Gizmo’s first major show, and the Jacksonville Equestrian Center proved to be a great place to kick off the gelding’s career.

“He did really well,” Neal said. “Being that this was his first show, he was awesome. He’s very calm for a four-year-old.”

With the Shamrock Showdown under their belt, Neal is excited for what lies ahead.

“Probably by end of this year, I’ll want to pick up our time,” she explained. “Right now, we’re not running fast because we’re working on proficiency and getting around the barrels the right way, so right now we’re taking it slow. I took him here to get seasoned before we start going faster. This was a great experience for him.”

Ansley Herrin and her family traveled from Hortense, Georgia to compete with her horse Allie, who she’s owned for just a year. This was their second Shamrock Showdown together, and Herrin hoped to see improvements in their ride after spending a year working together since their first time around the barrels. “I am nervous,” she admitted as she prepared to enter the stadium, “But Allie loves what she does.”

The exhibition’s winners included Sabra Moore, Kenny Hodges, Kalie Ruthledge, and Ron Lattimer, among others. All of them clearly had a bit of Irish luck (as well as a lot of skill!) on their side.

Today, the Jacksonville Equestrian Center is transforming the barrels and western saddles to dressage rings for the facility’s next event, which will take place on Saturday, March 26. This will be the Northeast Florida Dressage Association (NFDA) Schooling Show, which will include a special Freestyle Challenge. Visit http://www.jaxequestriancenter.com/events/ to find out more about this show and other upcoming events.

Events at The Jacksonville Equestrian Center range from barrel races to dressage shows to horsemanship clinics and more. Even for non-equestrians, the Jacksonville Equestrian Center makes sure to keep something on the calendar for everyone, with canine shows, concerts, and community events regularly taking place. For more information, visit www.jaxequestriancenter.com or call Penny Gorton at (904) 255-4227.