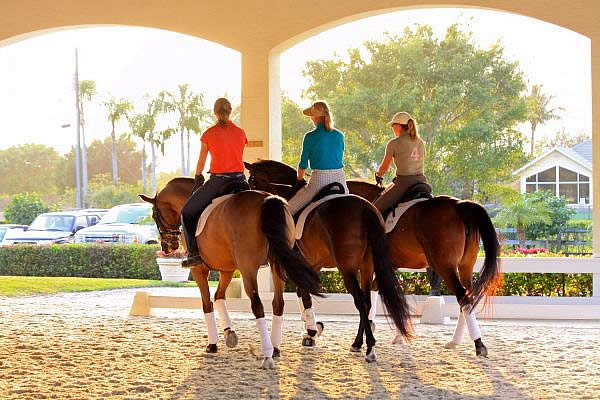 Wellington, FL – February 18, 2013 – The international quadrille team sponsored by The Seley Parker Group of Merrill Lynch plans to give their competitors a run for their money at The Challenge of the Americas (COTA) presented by SSG Gloves on Saturday, March 9.

Team International The Seley Parker Group of Merrill Lynch has been practicing an intricate quadrille for The Challenge and its 11th anniversary return as a one-of-a-kind affair highlighting the equestrian sport of dressage. Competing riders include the “Who’s Who” of top equestrian competitors in the United States, Canada, Latin America and Europe riding in team quadrilles to Play for P.I.N.K. to help raise funds for breast cancer research.

Josh Parker, one of the principals of The Seley Parker Group, said it’s their seventh year to sponsor the event. “The Seley Parker Group of Merrill Lynch is extremely proud to once again support the International Team and The Challenge of the Americas,” he said. “Raising awareness and helping find a cure for such a terrible disease should be one of everyone’s top priorities.”

Susanne Hamilton, a United States Dressage Federation (USDF) Gold Medalist and one of the team riders, said she went to her first Challenge of the Americas six years ago with her friend, Ingrid Lind, who lost her fight with breast cancer three years later.

“This is close to my heart,” she said. “I’d like to dedicate my ride to someone this year who’s fighting hard. She’s in Britain and she’s a Grade II para-rider who is dying from this,” she continued with a hitch in her voice. “Her name is Gwenllian Hughes. I want to dedicate this to her.”

Quadrille rider Sharon McCusker, a USEF long listed FEI Grand Prix competitor and trainer, also believes in the cause. “I’m delighted to be involved with this benefit,” she said. “Almost all of us have lost somebody who has been affected by breast cancer.”

One of the Team International coaches, Ruth Hogan-Poulsen, who creates freestyles for every level of dressage rider, said she is happy and honored to be a part of The Challenge of the Americas. “It’s impressive and shows the importance of the cause when six professionals and two choreographers take time from their schedules at least once a week to show their dedication to COTA,” she said. “As a choreographer and music editor, it’s a fun challenge to create for both riders and spectators alike.”

The other coach and choreographer, Erin Swaney, an FEI rider and trainer, said she started helping with The Challenge in response to COTA organizer Mary Ross’ request.

“I always went to The Challenge and one year Mary needed somebody to coach one of the teams and she asked me to do it,” she said. “I had watched it for years and I always thought of things that would look different and amazing for the spectators.”

She said that since she has been one of the coaches for the quadrilles, she strives to make the choreography fresh and jots down ideas for the freestyle throughout the year, paying special attention to visual excitement from every angle for the audience.

“It’s funny because every year the riders think it’s crazy and they say they can’t do it but in the end, everyone is surprised,” she laughed. “Last year the team was so cute. I gave them the pattern and they gave me THAT look, but in the end it all came together. This year it’s a whole new team and they have a really great dynamic. When we walked the pattern the first time it was hilarious but it all seems to work out in the end. I like how the whole thing unfolds and how each person comes together for the team.”

Aside from the serious theme of fundraising for breast cancer research, fun is a central theme to all the riders on the team.

“I did it once before and it was a really fun experience,” Grand Prix dressage rider and trainer Todd Flettrich said. “Everybody gets together to ride and it’s for a good cause. I enjoy the sense of camaraderie when we are all for the same team. It’s great because it’s for the cause and not for yourself.”

Catherine Haddad-Staller, a two-time Grand Prix winner in the U.S. and a USDF Gold Medalist, agreed. “I think it’s a worthy cause and I am quite excited to be a part of the international team,” she said.

Cherri Reiber, an FEI trainer and competitor, added she is also involved with the quadrille to support the cause. “We’re having a ball,” she said. “It’s really been fun.”

This is Nancy Later’s first year to participate as a rider in the quadrille and she said she is helping support organizer Mary Ross in her effort to fund breast cancer research. Later is a USDF Bronze, Silver and Gold Medalist.

“I think Mary’s done a great job for years and we love going to watch and I always wanted to be part of a team so it’s very exciting,” she said. “We’re a newbie team. So far we are having a great time. We can be partners instead of competitors so it’s really fun. It’s important that we remember to thank our sponsor, Merrill Lynch, too.”

Parker from the Seley Parker Group of Merrill Lynch added, “This event, with all of its equestrian pageantry, is always a blast and raises considerable funds for the Breast Cancer Research Foundation.”

To learn more about The Challenge of The Americas, visit www.challengeoftheamericas.com.

The Challenge of The Americas Fast Facts

The Challenge of The Americas (COTA) presented by SSG Gloves, known throughout the equestrian world for its spectacular performances on horseback, returns for its 11th anniversary to continue its fight against breast cancer. This annual fundraiser is a one-of-a-kind affair that highlights the equestrian sport of dressage. Competing riders include the “Who’s Who” of top equestrian competitors in the United States, Canada, Latin America and Europe.

There are few, if any, places throughout the world where an audience can delight in the performances of such a large and distinguished group of riders and their magnificent equine partners. The Challenge of The Americas’ teams of international riders compete in quadrilles to world-class music and choreography in an effort to raise money to help find a cure for breast cancer. Proceeds benefit the Breast Cancer Research Foundation through Play for P.I.N.K.

The Challenge of The Americas Beneficiaries:

Play for P.I.N.K. (Prevention, Immediate diagnosis, New technology, Knowledge) is a grassroots organization dedicated to raising funds to fight breast cancer, by creating and promoting awareness of breast cancer through sporting and lifestyle events including men’s and women’s golf tournaments, tennis, swimming, card games, equestrian events, and shopping benefits.  Our commitment is to contribute 100% of all funds raised to our beneficiary, The Breast Cancer Research Foundation. In 2012, PFP donated $4 million to BCRF for a cumulative total of $29.75 million. For more information about PFP, visit playforpink.org.