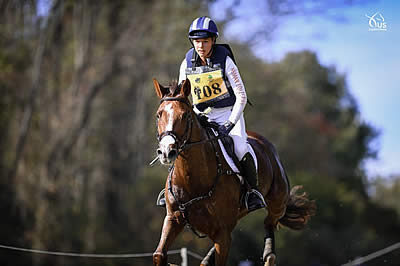 As the recipient of the grant, Farley, who trains with the O’Connor Event Team, will receive up to $5,000 to help offset expenses associated with her training over the next year. Note: the grant is valid for this year or next, if necessary, due to COVID-19 restrictions.

“It is an honor [to receive this grant],” said Farley, of San Clemente, Calif. “The fact that they recognized me and what [I accomplished] last year is huge. This is a big deal for me and really special. I have talked to a couple people [about how to use it], and the most beneficial thing would be to possibly go overseas and get some experience and see how it all works.”

Farley received this select distinction following a solid 2019 competition season. In her first year competing at CCI3-S, CCI3*-L, CCI4*-S, and CCI4-L level events, she placed in the top 15 in eight of the 12 FEI competitions entered. Most notably, she placed second in The Dutta Corp. Fair Hill International Three-Day Event CCI4*-L with BGS Firecracker, the 10-year-old Irish Sport Horse mare she owns with Paddy Byrne.

In their debut CCI4*-L, they finished on their dressage score of 38.30. Earlier in the year, they jumped double clear, picking up only 4.4. time penalties to place fifth in the Jersey Fresh International CCI3*-S. US Equestrian named Farley to the Emerging Athlete Eventing 18 Program in 2014. She advanced to the Emerging Athlete Eventing Athlete 25 Program in 2019. In addition, she was part of the bronze medal-winning Area VI team at the 2016 FEI North American Youth Championships.

The USET Foundation Amanda Pirie Warrington Fund allocates the Amanda Pirie Warrington Grant annually. Pirie’s family established the fund in her memory for the purpose of providing financial assistance to an eventing athlete identified with great talent and ability to represent the United States in the future. It is intended for a recipient that will benefit most from the opportunity to continue their training with top coaches and to compete against the world’s best in eventing, one of three Olympic equestrian disciplines.

Thanks to the Amanda Pirie Warrington Grant, Farley can continue to focus on her training and prepare for competitions, helping to reach her goal of representing the United States on the international stage.