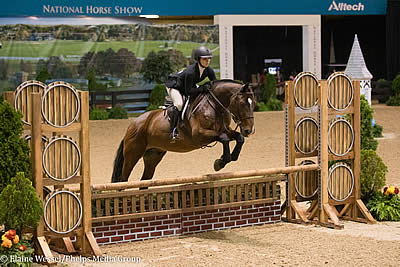 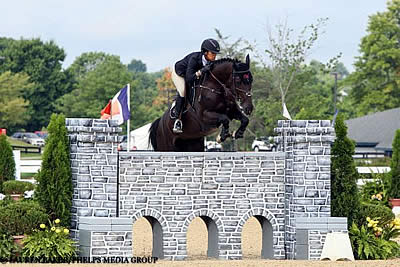 Lexington, KY – July 29, 2016 – Despite being her first show with Disco Lady, Mavis Spencer made winning look easy as she piloted the 8-year-old mare to victory in the Open Jumpers 1.40m on Friday at the Kentucky Summer Horse Show.

“I think Disco Lady is a super mare,” Spencer said. “She’s so talented; she’s so scopey and so brave and careful. I think she’s everything you would want; she has all the good qualities you want to have in a top horse.”

Spencer and Disco Lady were clear over the first eight fences in the power and speed class to advance to the speed portion, which they completed in a quick 33.483 seconds.

“I ended up doing 7 strides after the double where a lot of people had done 8, just because I know she’s so careful,” Spencer said. “She’s got such a big step as well, so I can kind of gallop up and challenge her a little bit to the fences and she jumps better for it. It all worked out well today; it was a good course for her.”

Spencer said she got the ride on the Neil Jones Equestrian entry last fall after George Whitaker and Denise Wilson had been showing the mare.

“Tim Collins bred her, and she’s owned by team Collins Strijk and Alfons de Vrindt, so she’s been going through their program,” Spencer explained. “I think it’s very nice for them to have bred her themselves and brought her along and now for her to start the big classes and be successful.”

The early leaders in the class, Shane Sweetnam and Sweet Oak Farm’s Cantero Da Lagoa, clocked a time of 34.194 seconds. Their time held the lead for the majority of the class until Spencer overtook them, leaving Sweetnam to settle for second. Third place went to Spencer Smith, who tripped the timers in 35.133 seconds with Azibantos.

Earlier in the day, the High Amateur Owner/Junior Jumper division took the stage in the Rolex arena. Emma Wujek and her own Ugaf took home the win with their effective round, going double clear and stopping the clock in 59.377 seconds.

Just a second behind the leading time, Benjamin Simpkins and Grindstone Farm LLC’s Vivaro B finished in second place with their time of 60.94 seconds. Third place went to Adrienne Sternlicht and Starlight Farms 1 LLC’s Helios and their time of 63.031 seconds.

Following shortly after, the Open Jumpers 1.35m got underway, and it was Manuel Lecuona and Golden Point Partners LLC’s Figaro D who bested the field to earn the blue ribbon.

“Alan [Wade] knows what he’s doing, and he makes us ride better and get a little bit more sharp,” Lecuona said. “You have to be precise, and I think that’s good. The horses learn so much. Figaro D is a very competitive horse. He goes in the ring and he wants to jump for you. I’m really happy with him because he always tries his best.”

Lecuona, who is based on a farm in Lexington for the summer, said he loves being located so close to the Kentucky Horse Park.

“The facility is great, the horsemen are great,” Lecuona explained. “We rent a farm here, and we have the turnout that the horses love. In Kentucky they can be horses again and go out and be happy. You feel it, too, when they start feeling happy and jumping really well.”

Eighteen-year-old Madison Sellman of New York, rose to the top of 18 entries in Friday’s ASPCA Maclay horsemanship class in the Stonelea Ring at the Kentucky Summer Horse Show aboard her own Alvarez L.

“It was my first round here in Kentucky this year and I thought it went pretty well,” Sellman said. “I have not been showing consistently this summer and it was my first time in the show ring since WEF.”

She has ridden Alvarez, a 13-year-old Holsteiner gelding, for two years since purchasing him in Europe with her mom. After he was imported, Sellman moved to train with Stacia Madden at Beacon Hill Show Stables in New Jersey.

“Alvarez is my only horse and he is my partner for life,” she said. “He is typically lazy, but once I get him going he has great self-carriage and is a simple ride. I’ve done equitation with him since we bought him and he really excels at it.”

The equitation course consisted of a challenging eight stride bending line, but Sellman impressed the judges with her fluid jumping round and flawless flat phase.

“Lately I’ve been working on my release over the jumps,” Sellman explained. “I feel like I have been consistent in my riding and I’m continuing to work on being stronger in the basics.”

The pair plans to compete at regionals in Kentucky later in the summer, and Sellman has her eyes set on qualifying for the Platinum Performance/USEF Show Jumping Talent Search finals, the WIHS Equitation Finals, and the ASPCA Maclay Horsemanship Championships.

“We have been working on consistency with Alvarez because he can get stiff,” Sellman explained. “I work on loosening him up, making sure he is really with me and allowing him to push off the ground over the jumps.”

The Washington International Horse Show hunter phase also took place in the afternoon at the Stonelea Ring with 30 entries. T. J. O’Mara of Rumson, New Jersey, impressed the judges with his ride on Walstib Stables LLC’s Kaskade and earned a score of 93.

“She was a little fresh in my lesson yesterday, so I was a bit skeptical about how her rideability was going to be today, but she was great,” O’Mara explained. “She really had an open stride, she felt great and I was confident throughout the course.”

O’Mara has been riding the 10-year-old Dutch Warmblood mare for three years, and the WIHS hunter phase was their first class together at the 2016 Kentucky Summer Horse Show.

“I thought the long approach oxer and the last vertical in the course really tested how straight your horse was, so I had to focus on having an opening rein at those jumps with an outside leg,” O’Mara explained. “The lines rode a little easy for me and overall it was a straight forward course.”

O’Mara said he has been working on getting his lower leg stronger this season and not leaning too far forward with his body, as well as his release.

“She can be a bit strong, but I really try to be as soft as possible with my hands and support her with my leg,” he continued.

The incoming freshman at the University of Kentucky plans on balancing his studies for the agriculture economics major as well as competing in the indoor circuit during the fall semester.

“I plan on leaving my equitation and jumper horse with my trainer so they can continue to work with them while I focus on school,” O’Mara said. “I will be in school for about three weeks before going to Maclay regionals, the USEF Finals, and the rest of the indoor circuit.”