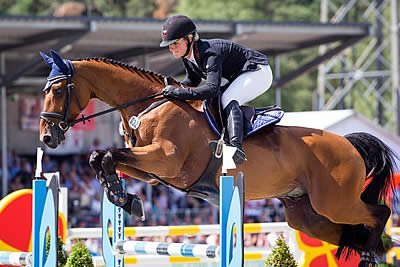 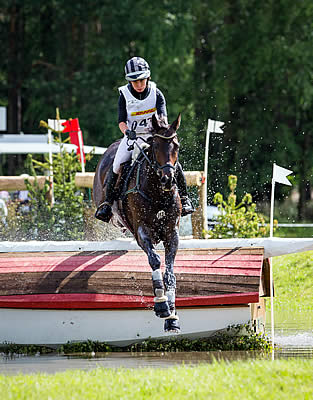 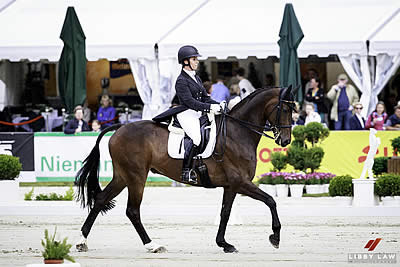 Bettina Hoy (GER), who is currently enjoying a rich run of form, leads after Dressage at Luhmühlen CCI 4* presented by DHL (GER) and has a great chance of winning her home country’s premier event, the fifth leg of the FEI Classics™, since triumphing here in 2005 on Ringwood Cockatoo.

Triple Olympian Hoy, 54, who divides her time between competing, caring for her elderly parents and training the Dutch Eventing team, is renowned for her artistry in the Dressage arena and showed the way to younger riders with a mark of 36.0 on her 13-year-old Westphalian gelding Designer 10.

“Designer was really relaxed today. I was a little annoyed about the small fault we had in the first extended trot, but otherwise he felt great. In fact, the last trot was so good I almost forgot to halt for the final salute!” — Bettina Hoy (GER)

Julia Krajewski (GER), who made a sparkling four-star debut here last year when third on the athletic Selle Francais Samurai du Thot, is second on 37.1 and US rider Marilyn Little, riding the mare RF Scandalous, a newcomer to this level, is third on 38.0. Britain’s Nicola Wilson conjured a mark of 38.7 on the lively black mare Bulana, a notably bold cross-country performer, for overnight fourth.

Michael Jung (GER), the clear leader in the FEI Classics™ series, is not riding in the 4* at Luhmühlen, but Maxime Livio (FRA), currently second in the standings and winner of Pau and runner-up to Jung at Kentucky, is and is lying in 12th place on Opium de Verrieres. Badminton winner Andrew Nicholson (NZL), third on the Classics leaderboard, is 29th on Tesio ahead of what promises to be an exciting cross-country day.

“Everything has been built beautifully with some big jumps, which should not be underestimated. [New course-designer] Mike Etherington-Smith [GBR] has created something very different, which has been positively received.” — Hans Melzer, German team trainer

Luhmühlen, Germany’s main championship venue, is celebrating its 60th anniversary – it’s the second oldest event in the FEI Classics™ after Badminton – and has received a royal visit from its patron.

“There is so much that is excellent about Luhmühlen: the course, the way it’s run, the hospitality and the way everyone is treated. Over 60 years there have been so many people who rose to the occasion.” — HRH The Princess Royal 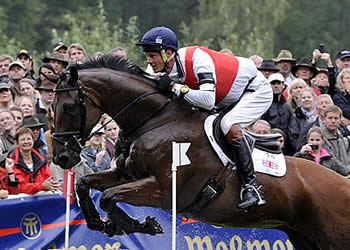 For many riders this is a crucial last chance to impress selectors before the Alltech FEI World Equestrian Games™ 2014 in Normandy (FRA) in August, as well as an all-important opportunity to seize a foothold on the FEI Classics™ leader board before the final leg at Burghley (GBR) in September.

Longines, the FEI’s Top Partner, has for the first time joined Luhmühlen as official Time-keeper and Watch for this key leg.

“We are proud to be for the first time Official Timekeeper and Official Watch of Luhmühlen CCI 4*,” said Walter von Känel, President of Longines. “As First Top Partner, Official Timekeeper and Watch of the FEI, the partnership with this event, which is part of the FEI Classics™, seemed natural. In addition, this competition perfectly illustrates the values of our brand, namely tradition, performance and precision.”

The current first, third and fourth-placed riders on the FEI Classics™ leaderboard all have good rides at Germany’s premier event.

World number one William Fox-Pitt (GBR), already a three-time winner at Luhmühlen and victorious at Pau (FRA) 2013 and Kentucky (USA) this year, holds a commanding 15-point lead. He rides an old favourite, the thoroughbred Cool Mountain, a CCI4* winner of Kentucky in 2010 and a world team gold and individual silver medallist at the Alltech FEI World Equestrian Games™ in the same year.

Christopher Burton (AUS), who triumphed at Adelaide (AUS) last year on a catch ride, has the 12-year-old mare Tempranillo, a ride he took over from Sweden’s Ludwig Svennerstal in 2013. The new combination won the CIC3* at Hartpury last year and were 22nd at Pau.

Oliver Townend, who won the FEI Classics™ in 2009 and was recently second at Badminton (GBR), has entered the ex-racehorse Black Tie ll for his first CCI4*.

Much interest will centre on last year’s FEI Classics™ winner, the world number two Andrew Nicholson (NZL). He must have a great chance on the Spanish-bred Quimbo, a winner at Kentucky last year, but which was retired on the Cross Country at Badminton. The flat track at Luhmühlen should suit the beautiful black gelding and, if he is on form, German spectators are in for a treat as he is a spectacular jumper.

Jonelle has Classic Moet and The Deputy, which she pulled up after an early run-out at Badminton, and Tim has the Tattersalls CIC3* winner Wesko, which took an unfortunate ducking in Badminton’s Lake on the first third of the course.

Lucinda Fredericks (AUS) has already won three of the world’s six CCI4*s – Badminton, Burghley and Kentucky – and in 2012 she came close to taking Luhmühlen on the German-bred Flying Finish when they were second. They were 10th last year and, after pulling up early at Badminton in May, she has brought the horse back for a third attempt on the Luhmühlen trophy. Her compatriots include Andrew Hoy who, like Fredericks, has yet to add Luhmühlen to his collection of CCI4* wins.

Some of the top German horses will be competing in the CIC3*, but former Luhmühlen winners Michael Jung, Bettina Hoy and Ingrid Klimke have CCI4* rides. Jung, the current Olympic, World and European Champion, rides Fischerrocana FST; Klimke has her European team gold and individual silver medallist FRH Escada JS, and Hoy rides the up-and-coming Designer in what promises to be a high-quality contest.