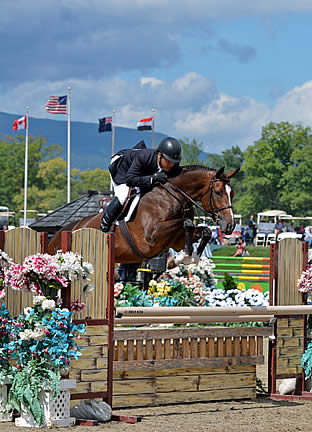 ©ESI Photography. Jimmy Torano and La Bonita putting on a show in the final round of the Diamond Mills $500,000 Hunter Prix Final.

SAUGERTIES, NY (September 9, 2013) – Jimmy Torano of SW Ranches, Florida admits that he and Kathryn Haefner, who owns La Bonita, gambled on the Diamond Mills $500,000 Hunter Prix Final, entering the five-year-old German-bred Warmblood mare in the highest stakes hunter class in the world. Lady Luck, however, was on their side at HITS Saugerties this week. Or, perhaps, La Bonita is just that good.

“She’s a very special horse and what she did today is unheard of,” said Torano. “This is only her second show, and for her to walk into the Outside Course this week and then the Grand Prix Stadium today and perform the way she did shows just how unbelievable this horse really is.”

Haefner could not contain her excitement when the announcer spoke her mare’s name over the sound system and accepted the $150,000 winner’s check with tears streaming down her face. “I have no words,” said Haefner. “Jimmy is a great rider and she is a special horse. I am still speechless that this has happened.”

La Bonita is by Lupicor and was imported by Stewart Moran for the Haefner family and is impressing not just her owners, but fellow competitors as well.

“She was the horse to watch in this class,” said Patricia Griffith of New York, New York. Griffith won the Diamond Mills Hunter Prix last year with Lexi Maounis’ Sienna. “Everyone noticed her on the first day on the Outside Course and she had us all wondering who this horse was.”

Griffith and Sienna returned this year to finish third, with West Coast rider Hope Glynn of Penngrove, California sliding into second. Glynn has been making the trek from California to New York for this event all three years that it has been offered and says that while the prize money is unprecedented, the class is doing great things for the advancement of the hunter.

“It’s nice to come home with big check, but it’s also such an opportunity to be able to come home and say your horse jumped consistently well over three days and proved itself,” said Glynn who qualified to ride in the Diamond Mills Hunter Prix Final during the HITS Desert Circuit in Thermal, California. “I believe in the horses that I bring to this class and it really helps to show them off.”

For Torano, who also rode in the Zoetis $1 Million Grand Prix, the Hunter Prix, set by Rian Beals of Saugerties, New York was, in some ways, harder. “I didn’t even think that we would make it through the two qualifying rounds, so to ride for this kind of money against these caliber horses and riders was nerve racking!” he said.

“I knew going into the final round that I could be no less than fourth, so I knew I could be relaxed, but finding the jumps out there was a little stressful! There’s a lot going on out there,” she said of her two trips in the Strongid C 2X Grand Prix Stadium.

Otten, 66, piloted Phillips’ Hanoverian gelding, a former 1.30-meter jumper, during the winter circuit in Florida and put her leg over the ride again this week while Phillips is fast approaching her due date with her first child.

This marks the second year that the HITS $250,000 Hunter Prix Final has been a part of HITS Championship Weekend.

“I was thrilled to come do it, because I haven’t been showing much lately,” she said. Otten spends most of her time staying in riding shape at home. “I felt sort of semi-retired, so this is a huge thing for me to go in and win this class.”

Corinne Milbury of Fairport, New York rode her own Kavalier to second place, cashing in for $45,000 while Kelly Lively of Holliston, Massachusetts piloted Tarzan, owned by Mr. & Mrs. Ernest Oare to third. Anna Pavlov of Pound Ridge, New York was fourth aboard her own Adelante and Linda Corvari of Long Valley, New Jersey rounded out the top five on her own Larger Than Life.

About Diamond Mills Hotel & Tavern
Just 100 miles outside of New York City, nestled in the Village of Saugerties, Diamond Mills is a 30-room luxury hotel featuring stellar accommodations, fine dining at The Tavern and full-service events at a state-of-the-art Special Events Center. Diamond Mills is a proud member of the Small Luxury Hotels of the World, an unsurpassed collection of over 520 luxury hotels around the world. Saugerties’ newest luxury hotel is also the proud sponsor of the Diamond Mills $500,000 Hunter Prix Final, which will take place at HITS-on-the-Hudson as part of the HITS Championship Weekend. For more information about Diamond Mills or the special VIP packages available to HITS-on-the-Hudson exhibitors, please visit DiamondMillsHotel.com or call 845.247.0700.