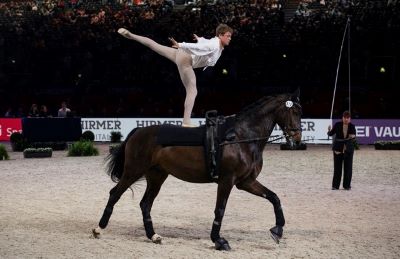 Under the lights of the Leipziger Messe, the 2022 FEI Vaulting World Cup™ Champions were crowned. No-one could keep French Manon Moutinho from the female title, whilst Lorenzo Lupacchini took his chance to bring home the glory for Italy. Janika Derks and Johannes Kay gave a spine-tingling ultimate performance to win the Pas de Deux.

After a great start in the Technical Test the trio of Manon Moutinho, Corrine Bosshard, and Saitiri pulled out a show stopping Free Test with a perfect artistic score to win the final on 8.431.  “I am really happy. I could not have expected more from me, my horse, or my lunger. It was a really good experience to start this new season 2022. There is still some work to do, but we are only in April and I am very pleased.”

Bringing back her 2019 winning freestyle theme wasn’t enough for German defending champion Janika Derks.  She had to settle for second place, 8.257.  Making her mark in her first individual World Cup final, Kimberly Palmer (USA) was one of only three female individuals scoring over 8 points and finished in third place (8.009).

The men’s competition went to a tense finish. After slipping from the horse in one of his risk exercises, Lambert Leclezio (FRA) (8.628) had to watch the title go to Lorenzo Lupacchini (8.795). The Italian barely lost a point as he performed gracefully on top of Rosenstolz.

“I am really really happy because I didn’t expect this result. I just participated for enjoying. I was on the third place so far, so I had nothing to lose and nothing to win. So I tried to give emotions and not only exercise,” said Lupacchini.

He becomes one of only two athletes to have won the FEI World Cup™ Final in the Individual and Pas de Deux class. Jannik Heiland completed the podium for Germany (8.019).

An exquisite final performance from the German pair, Janika Derks and Johannes Kay, concluded the FEI Vaulting World Cup™ Final as well as their vaulting careers. Alongside Nina Vorberg and Humphrey Bogart OLD, they left the audience with goosebumps as they became World Cup Winners (8.754). Screaming with delight as he landed his final dismount, Johannes later summed up his experience “Yes, once in my life I competed in the World Cup: that was here and today and that was the last time – and we have won. But winning was not important to me. We made the thing out of it, what we wanted to make out of it. That worked out; we are satisfied… To have found such a beautiful conclusion, in such a beautiful atmosphere – it doesn’t get any better than that.”

Romana Hintner and Eva Nagiller managed to improve on their first round performance to move up into second place (8.016) leaving Chiara Congia and Justin van Gerven in third (7.960).

It has been an historic Final in Leipzig. France and Italy each took the title for the first time in their respective classes. Wrapping up the experience and marking the career end for Janika Derks: “I think we have achieved exactly what we wanted to achieve here again: having fun with the sport, just enjoying it – this was just the perfect show for both of us to find closure for us.”